Heating up in the Haynesville - Projects Emerge, with Competition for LNG Growth

Originally published for customers May 18, 2022.

There are a growing number of projects in the Haynesville, which range from gathering line expansions to long-haul greenfield projects. As development efforts gain traction, if the timing of infrastructure development doesn’t match expectations, the gas will find an outlet, perhaps in a different direction than intended, thus impacting those outside of the Haynesville.

So far, the primary new greenfield projects, Gulf Run and LA Xpress, to serve growing LNG demand are tracking as planned with construction, with FERC issuing a draft environmental impact statement for Driftwood’s Line 200 and 300 project. From inter and intrastate greenfield and brownfield development in the Marcellus, Utica and Permian, variables delaying projects have consistently reared their ugly head. While this hasn’t yet happened in the Haynesville, we will be monitoring for early warning signs.

Last October, in Haynesville May Soon Need More Pipeline Capacity, we dove into why Chesapeake’s acquisition of Vine Energy and takeaway capacity of the largest producers in the Louisiana portion of the Haynesville basin indicated the increasing need for expansion opportunities for pipelines in the region, primarily to move gas to LNG terminals along the coast. Today we dive into some of the announced projects in the Haynesville, which range from gathering line expansions to long-haul greenfield projects, from those projects in permitting to those well along with construction. As development efforts gain traction, if the timing of infrastructure development doesn’t match expectations, the gas will still find an outlet, perhaps in a different direction than intended, thus impacting those in and outside of the Haynesville.

One of the huge benefits that the Haynesville basin has compared to, say, New England, is its proximity to a multitude of pipelines and to the growing demand centers of LNG export terminals along the Gulf Coast. Midstream companies have expressed a willingness to build more, driven by increasing demand in Europe, growing production and rig count and, to the extent an interstate pipeline is being proposed, FERC putting its policy statement on ice, at least for now.

But recent pipeline development in the Haynesville isn’t necessarily new, with various projects in advanced stages of construction and some having come online under the radar in prior quarters. For example, projects that have recently come online include Enbridge Midcoast Energy’s CJ Express pipeline, which entered into service in April 2021, and Enterprise Products Partners’ Gillis Lateral pipeline and an expansion of its Acadian Haynesville Extension, both of which entered into service in December 2021. 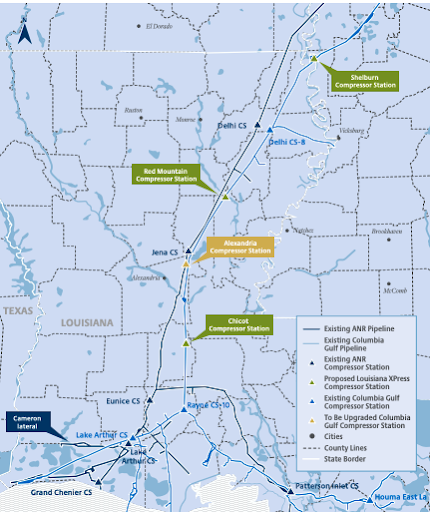 There are two projects far along with construction that could provide up to 2 Bcf/d of new capacity to the region. Before getting to them, it is instructive to note that last week FERC issued the draft EIS for Tellurian’s Driftwood’s Line 200 and 300 project, a 5.4 Bcf/d nominal capacity project that would offer more economic and efficient pathways/connections to natural gas supply to the Lake Charles market.

The project would involve the construction and operation of 36.9 miles (Line 200) and 30.8 miles (Line 300) of dual 42-inch-diameter natural gas pipelines originating near the town of Ragley in Beauregard Parish, Louisiana southward near the town of Carlyss in Calcasieu Parish, Louisiana. Interestingly, on the controversial topic of how to handle greenhouse gas emissions, FERC staff noted that “this EIS is not characterizing the Project’s GHG emissions as significant or insignificant because the Commission is conducting a generic proceeding to determine whether and how the Commission will conduct significance determinations going forward.”

Another project that will have a big impact on basin dynamics once it goes into service is Energy Transfer’s (formerly Enable) Gulf Run and CP Line modifications project. The new 135-mile Gulf Run pipeline, which began construction in Q1, will run south from Westdale to Starks to deliver U.S. resources to the Gulf Coast and international markets. It’s backed by a 20-year commitment for 1.1 Bcf/d of the 1.6 Bcf/d by Golden Pass LNG (Qatar Petroleum and ExxonMobil).

To accommodate natural gas deliveries to the Gulf Run Pipeline project, three compressor stations will be modified, along with other facilities, such as the existing Line CP pipeline, a natural gas pipeline that runs from Carthage, Texas, to Delhi, Louisiana. Line CP, which is approximately 172 miles long, currently transports natural gas from west to east, and these proposed modifications would allow for bi-directional flow on Line CP and delivery to the proposed Gulf Run.

Despite the adverse reaction to pipeline project development, especially in the Northeast, the Gulf Run project has, to some degree, fallen under the radar screen as it progresses on with what has so far been a relatively straightforward construction project. With a planned end of year 2022 in-service date, the area to watch will be Gulf Run’s progress on its nine Horizontal Directional Drills (HDD), two of which have completed two of the five operational stages. As we’ve seen with projects such as the Rover Pipeline (another Energy Transfer project), HDDs can be complicated and lead to serious construction delays. That said, so far there do not appear to be any setbacks.

The project is planned to be placed into service “between May 1 and September 1, 2022,” as stated in the company’s April construction report, with no change noted in its May report. This is a slight modification from original expectations driven by the “settling of some constructed facilities [that] occurred at the Chicot and Shelburn Compressor Stations.” 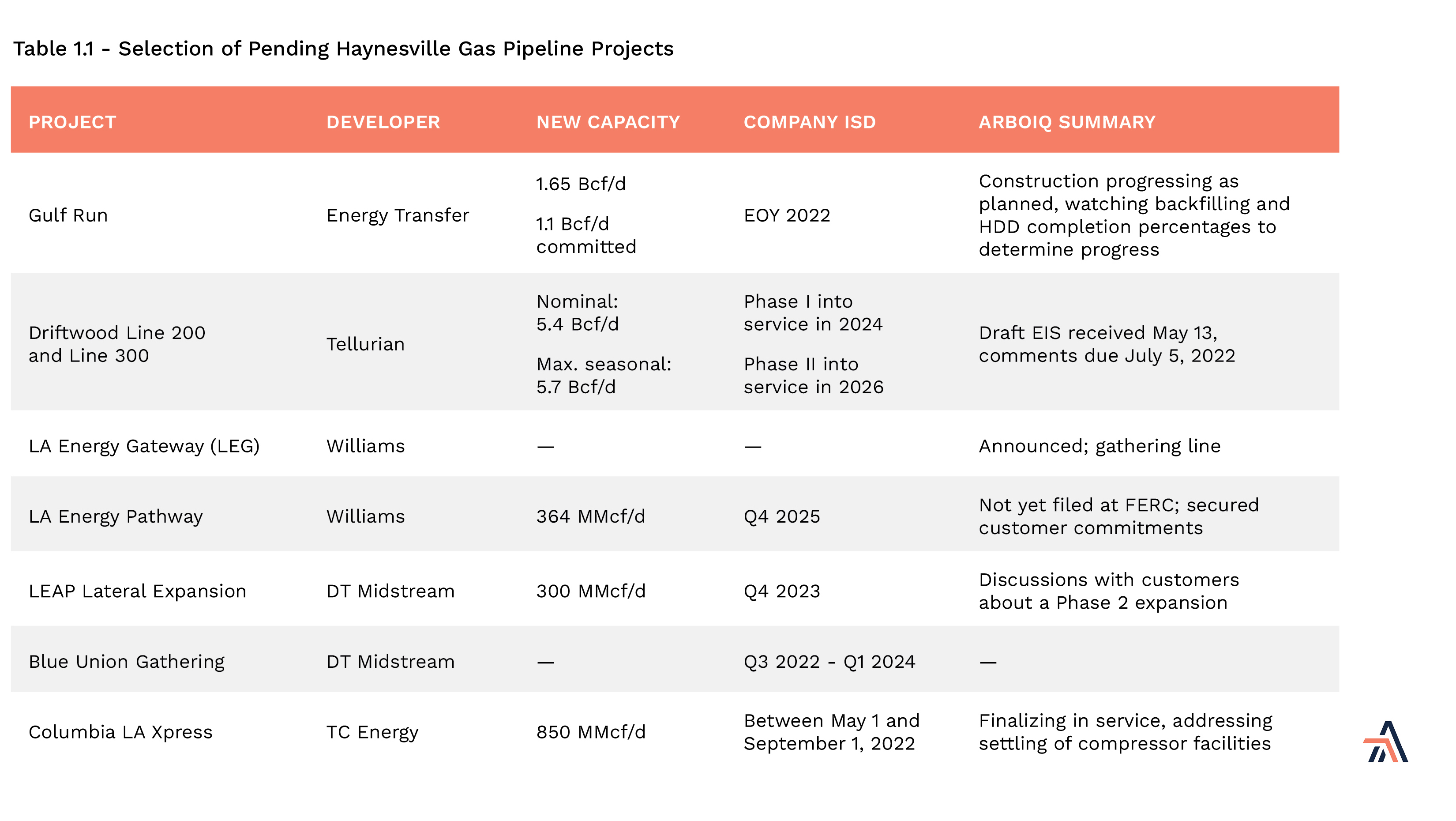 FERC Set to Vote on First Pipeline Expansion Projects Since Chairman Glick’s Elevation
Where and When are Renewables Coming?
FERC’s New Rule on GHG Ignores the Precedent It Relied On
Permian Pipelines — The Sequel
Handicapping the Next Wave of Permian Natural Gas Takeaway Projects

Handicapping the Next Wave of Permian Natural Gas Takeaway Projects