Handicapping the Next Wave of Permian Natural Gas Takeaway Projects

Market projections show that in the not too distant future, producers in the Permian basin will need additional pipeline capacity for the associated gas that is expected to be produced along with the growing production of crude oil.

There are currently five projects vying to meet that expected demand for takeaway capacity, but it is unlikely that all five will be needed. By examining the economics, in addition to progress on land acquisition, easements, and federal and state permits, one can determine which projects are more viable and progressing more quickly.

By looking at just the economics of the five competitors, we rank the proposed compression projects in the following order: Gulf Coast Express, Whistler and Permian Highway. With regard to the greenfield pipeline projects that are proposed, we find that Energy Transfer’s Warrior project has a decided cost advantage because of its shorter length. But the ultimate winners will likely also be impacted by the potential shippers on each of the projects and each shipper’s appetite to take on long-term capacity commitments based on each company’s own anticipated production growth.

Market projections show that in the not too distant future, producers in the Permian basin will need additional pipeline capacity for the associated gas that is expected to be produced along with the growing production of crude oil. There are currently five projects vying to meet that expected demand for takeaway capacity, but it is unlikely that all five will be needed.

By looking at just the economics of the five competitors, we rank the proposed compression projects in the following order: Gulf Coast Express, Whistler and Permian Highway. With regard to the greenfield pipeline projects that are proposed, we find that Energy Transfer’s Warrior project has a decided cost advantage because of its shorter length. But the ultimate winners will likely also be impacted by the potential shippers on each of the projects, and each shipper’s appetite to take on long-term capacity commitments based on each company’s own anticipated production growth.

On a recent webinar we hosted with our friends from East Daley, they showed their projections for gas production in the Permian basin and how it is expected to exceed the current effective pipeline capacity for taking gas away to the markets. 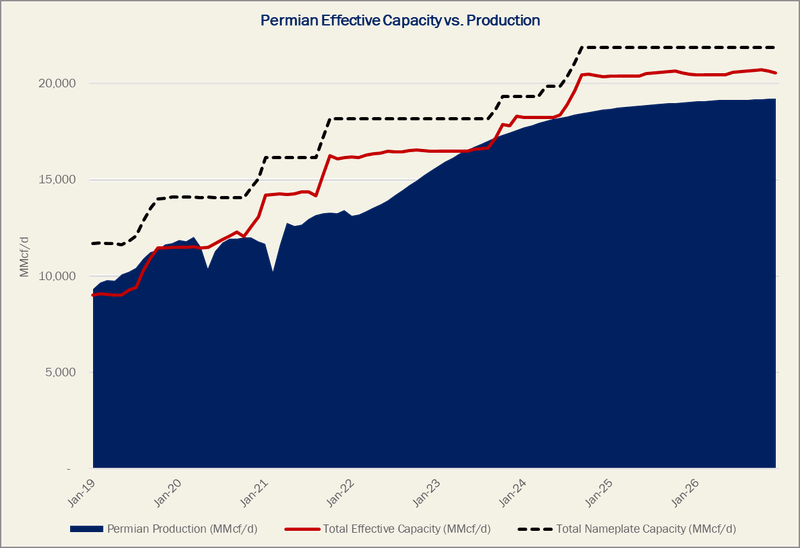 As seen above, they project that production will grow to slightly more than 17 Bcf/day by later this year or early next year and that will essentially exceed the current effective takeaway capacity on the existing pipelines. By 2027, they project total production to reach almost 20 Bcf/day, which will likely require at least 3 Bcf/day of additional pipeline capacity.

They are not the only ones expecting this shortfall in pipeline capacity and so various pipeline companies have all announced expansions. In Permian Pipelines - The Sequel, we discussed some of these competitors and explained our process for both monitoring and projecting their in-service dates through the use of a variety of data sources, including county property records and regulatory filings at both the Texas Commission on Environmental Quality and the Texas Railroad Commission (TRRC). In that article we discussed the three compression only projects that have been proposed to meet this need by Gulf Coast Express, Permian Highway Pipeline and Whistler Pipeline and one greenfield pipeline project, Matterhorn, that had recently been approved by the TRRC. Since then, Energy Transfer’s Warrior project, also known as the Midland Express project, similarly received approval from the TRRC for its 42-inch pipeline project.

Of the three pipelines that have proposed adding compression to get about 25% more capacity from their existing pipelines, Permian Highway is clearly the most expensive of the three.

As seen above, the Permian Highway project cost 25% more than the other two on three relevant measures: rate base, total cost of service and construction cost per inchmile.

These higher costs however did not result in it having the highest tariff rate that was approved by the TRRC and then relied upon to establish each pipeline’s tariff rate at FERC. The applications filed by all three pipelines at the TRRC followed very similar patterns. They all asked for a tariff rate that was lower than the rate they claimed could be justified, but the method used to calculate that cost-based rate was far more generous than FERC would have allowed. First, all three submitted that their depreciation rate should be based on a 30-year useful life and thus are including 3.33% of their rate base in the annual cost of service. This is far higher than FERC pipelines are typically receiving, although many have asked to receive similar rates in recent rate cases.

But the biggest difference in the way the TRRC allowed the pipelines to calculate their maximum tariff rates is that the tariff rate was calculated by dividing the total cost of service by the projected utilization rates for the pipeline, which all three asserted was just 75%. While Permian Highway and Gulf Coast Express reduced their total capacity by this utilization rate, Whistler went even further and successfully asserted that it should use its contracted capacity, which it reported was just 1.5 Bcf/day, rather than its total capacity of 2.0 Bcf/day, and further reduce that amount by the utilization ratio. Had all three pipelines been required to calculate their tariffs based on the full capacity of the pipeline, as FERC would have required, the maximum tariff rate would have been far lower.

As seen above, had Whistler been required to use its total capacity, even at the 75% utilization rate, its tariff rate would have been lower than the rate the TRRC approved. A review of the underlying contracts for each of the pipelines shows why this methodology was necessary because otherwise the rates being charged to the anchor shippers on Gulf Coast Express and Whistler would have been higher than the tariff rate.

By looking at the costs reported by each of the pipelines for their initial construction, it is possible to project the total cost of the system, assuming that they now double their compression to increase their capacity by the proposed 500,000 dth/day. If we assume that, following the expansion, they would all have contracts for the full capacity, but were still allowed to divide the total cost of service by only 75% of that total capacity, we can calculate an approximate post-expansion maximum rate.

As seen above, following the expansions on Whistler and Permian Highway, the projected tariff rate would actually be lower than the current anchor shipper rates. This may create a problem for both projects, as their anchor shippers may possess a right to demand a reduction in their current rates if the tariff rate falls below the current rate due to an expansion. Barring that, however, it seems clear that these two projects can offer shippers a much lower rate than Permian Highway can and still receive an appropriate return on the capital needed to fund the expansion.

There will be one other complicating factor, however. All three projects charge their customers a fuel retainage based on the actual fuel used to run the pipeline. If we double the compression on the system, but only see a 25% increase in the total capacity, it will likely mean that the overall fuel retention rate will increase. For the two pipelines that currently report their fuel retainage percentage, we can estimate how that retainage might change assuming a doubling of compression would result in a 75% increase in fuel usage, but only a 25% increase in throughput.

As seen above, if the current customers are willing to share equally in the increased fuel costs, the current retainage would jump by over 30%. That is a cost that they may not be willing to bear. But if the increased fuel usage is imposed strictly on the expansion shippers, their fuel retainage may be as high as almost 6%. All of these issues will need to be worked out for all three compression only projects, but, in our estimation, the lower overall costs for both Gulf Coast Express and Whistler puts them ahead of Permian Highway.

We can also use the cost data from these three recently completed projects to calculate an estimated cost for the two proposed greenfield pipeline projects, the Matterhorn pipeline and Energy Transfer’s Warrior project. If we assume that these two new projects can be built at a cost equal to the average cost per inchmile of the three recently completed projects, we find that the Matterhorn project would likely cost about $2.4 billion and the Warrior project could be built for about one billion less. They are both assumed to be 2 Bcf/day projects because their mainlines are 42 inches in diameter just like the three recently completed projects. But the Warrior project is about 300 miles in length, whereas Matterhorn is about 400 miles of 42-inch pipe and another almost 200 miles of smaller diameter pipelines.

From a cost perspective, this would seem to put the Warrior project ahead of Matterhorn, but a key factor for the success of all of these projects is determining who the shippers might be and whether they are expecting sufficient growth to justify making the long-term commitments needed to support an expansion. We can look at the shippers who made commitments on the three recent projects as an indicator of which producers may be willing to make such long-term commitments.

As seen above, among the known long-term shippers on these three projects, the largest by far are Chevron, Apache Corporation and XTO Energy. Our friends at East Daley tell us that all three of these companies are projecting at least 10% year-over-year growth in their production. Because they have been willing to underwrite expansion projects in the past, they may be willing to do so again. If they are willing to do so again, they may be the losers in the short run as the spread between Waha and Houston Ship Channel will likely tighten, and those who do not pay for the extra capacity will benefit from the Waha basis not falling significantly, without incurring the added cost of the new capacity. But the underwriters of this new capacity may win in the long term because as LNG projects come online, the Houston Ship Channel may begin trading at a premium and that would mean those who took out this capacity would benefit from the wide spread to Gulf Coast pricing, unlike those that were reluctant to commit to the new capacity.

If you would like more information on the recently completed projects or the proposed projects, please get in touch.

FERC Set to Vote on First Pipeline Expansion Projects Since Chairman Glick’s Elevation
Where and When are Renewables Coming?
Need for Rate Cases May Increase with Passage of Reconciliation Bill, but FERC Says Wait
Permian Pipelines — The Sequel
PJM Seeks to Reform Its Generation Connection Queue and FERC Follows Suit

Where and When are Renewables Coming?