Where and When are Renewables Coming?

Most of the generation being built in the U.S. right now is new wind and solar facilities, and most of them are fairly small compared to traditional thermal power plants, like natural gas and nuclear.

It is hard to track so many smaller projects to understand what the level of development will be. Arbo can provide you with a dashboard that shows the current status of projects on an aggregated basis around the country.

We are more than halfway through the year and over 34,000 MW in nameplate capacity of new wind and solar projects report that they expect to be in commercial operation by the end of this year. That is almost 100% of the amount projected at the beginning of the year, even though 5% of projects have been canceled or delayed. However, the slack has been picked up by newly proposed projects that can go into commercial operation within the year.

Most of the generation being built in the U.S. right now is new wind and solar facilities. Going into the year, it was projected that over 70% of all new generation to begin commercial operation this year, over 34,000 MW of nameplate capacity, would be wind and solar projects. Unlike thermal power plants that tend to be larger in size, these projects number in the hundreds, almost 600, and average less than 60 MW of nameplate capacity. This makes tracking these smaller projects on an individual basis almost meaningless.

Here at Arbo, we can provide you with a dashboard that shows you the current status of projects on an aggregated basis around the country. Today we report on the overall status of these wind and solar projects now that we are more than halfway through the year. At this point, we still expect almost 100% of the proposed new capacity on an aggregated basis to go into commercial operation by the end of the year. However, as we discuss below, that does not mean that all of the proposed projects will meet their targeted date. Instead, approximately 5% of projects have already been formally canceled or delayed beyond the end of this year, but the slack has been picked up by newly proposed projects that are expected to begin commercial operation later this year.

The Year So Far

Not All Projects Remain On Schedule

While the overall aggregate number for the year appears to be achievable at this point, it does not mean that all projects remain on schedule. We can break the projects down into groups, based on how they have met or modified their projected schedule.

As seen above, almost five percent of the projects have announced that they are delayed beyond the end of the year or were canceled entirely. Based on historical norms, we would expect more of those types of announcements during the remainder of the year, but as in the past, what seems to always pick up the slack is the previously unannounced projects that go into commercial operation within the year of their announcement. For now, therefore, we do not see any indication in the data that would lead us to question the overall number for new wind and solar capacity to be put into commercial operation this year.

Looking Further Down the Road

While anticipating the aggregate additions of capacity in the current year is helpful for short-term planning, we can also look further out to see beyond this year. It is also helpful to place the projects on a map to visualize where the development is occurring and that is where Arbo’s generation dashboard provides an easy reference. 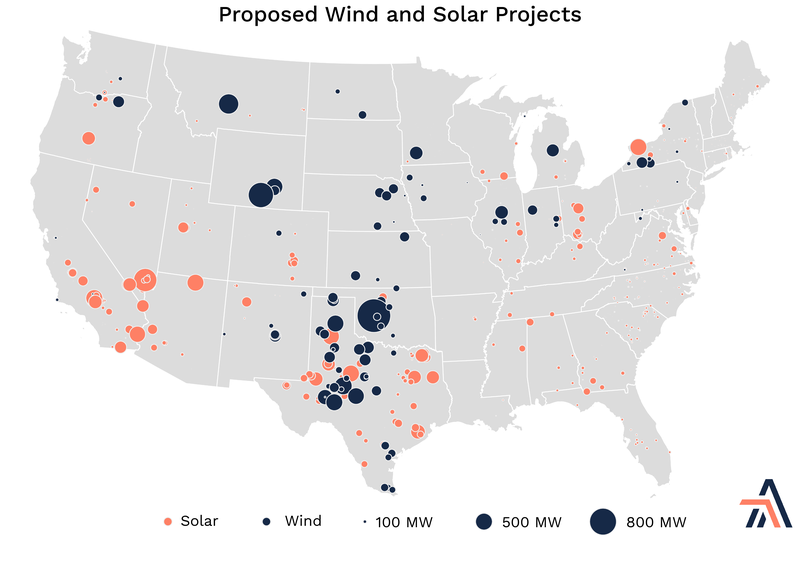 The map above shows the planned wind and solar projects, including those planned for this year and beyond. Putting the proposed projects on a map allows for a better picture of not only the active regions of the country, but also indicates the regional transmission authority for each project.

Let us know if you’d like a sample of our monthly dashboard, which covers renewables and all other types of generation.

FERC Continues to Hold Some Pipeline Projects in Limbo