The installed capacity of solar projects will need to continue growing if the U.S. is to meet the president’s stated goal of having net-zero carbon emissions by 2050.

Properly anticipating both the near-term and long-term growth of that capacity is critical to understanding future prices in the energy markets.

Based on past history, the developers of solar projects have been overly optimistic about their ability to bring projects online, even within one year of the projected date of commercial operation. By understanding the past history, we are better able to project what the near-term outlook is for the development of this critical energy source.

In International Energy Agency Lays a Path to Net Zero, we discussed the IEA’s report that calls for a complete phase-out of coal plants without carbon capture in advanced economies by 2030 and a complete phase-out of similar gas-fired plants by 2040. As we noted there, such a goal will require a substantial increase in the installed capacity of wind and solar projects. According to the authors of the IEA report, it is designed to close the “commitment gap,” which is the gap between the countries’ pledges to reduce emissions and the actual plans that can achieve the pledged goal. But even if that gap can be closed, it must be followed by a substantial increase in the supply of projects needed to meet the new commitments.

The U.S. has been increasing the amount of installed solar capacity but will need to continue the most recent pace and actually increase it by a substantial amount in the coming years. Being able to properly anticipate both the near-term and long-term growth of that capacity is critical to understanding future prices in the energy markets.

Today we discuss the recent history of the utility-scale solar market with an eye towards using that history as a way to project near-term growth. As we discuss below, the developers of solar projects tend to be overly optimistic in projecting their ability to bring projects online, even within one year of the projected date of commercial operation. By using data about past performance, we are able to give a more accurate assessment of the growth of this critical energy source.

Developers Are Too Optimistic, Even Within One Year of Commercial Operation

Each year the owners and developers of utility-scale power generation projects in the U.S. are required to file a report with the U.S. Energy Information Administration (EIA) that provides details on operating plants and planned projects. By looking back at these historical filings, it is possible to not only gain an understanding of the growth of the solar industry but also to gauge how accurate developers have been at projecting the date their projects will go into commercial operation.

First, the growth of the industry has been fairly impressive on a relative scale. 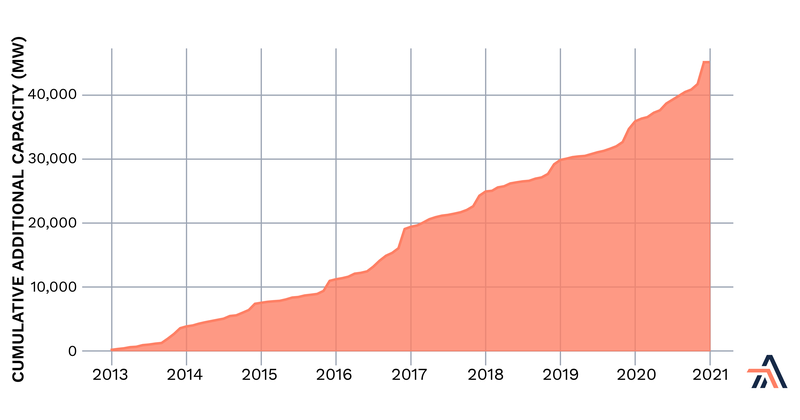 As seen above since 2013, the solar industry has been adding capacity at a fairly strong rate, with the greatest addition coming just last year. However, even last year’s additional capacity will need to at least double for about the next ten years, and then double again between 2030 and 2040, if the U.S. goal of being a net-zero carbon emission economy is going to be met by 2050.

This added capacity comes from a great number of small-sized projects.

What has not been so stellar is the industry’s ability to predict how much capacity it will add even within the year following the date of the prediction. Since the report is not due until the end of February, that means a developer is really only “predicting” ten months and any projects scheduled for the first quarter have likely been completed. Yet despite those advantages of timing, our data shows that solar developers were wrong about at least 30% of the projected additional capacity in each of the years, and that less than 70% of the planned projects for the current year are actually placed into service by the end of that year.

Interestingly, what saves the industry from showing such a dismal performance is that there are a number of projects that are placed into commercial operation each year that were never reported to the EIA as being planned. It is unclear whether this is a result of poor reporting practices or because these projects went from conception to completion all within one year, but the nameplate capacity added each year that was not projected is over a thousand MW.

Projections Beyond the Current Year are Too Low

While the predictions for the coming year are too high for what will go into service that year, the capacity proposed for the following years is much too low, likely caused by a combination of the fact that some projects take longer than anticipated, and the fact that some projects can be completed in less than two years from proposal to commercial operation date. Looking back at the history of the capacity additions over the last few years, one can see this trend fairly clearly.

As seen above, as we get closer to the year of operation the number of projects grows dramatically.

Commercial Operation Month is Not Smoothly Distributed Throughout the Year

For natural gas pipeline projects, the old saying was that all projects were designed to go into service on November 1. Part of that is because of the construction season being the summer, but also because of the demand for a gas project peaking in the winter. That combination puts a sense of urgency into having the project online before winter weather sets in. Given that solar projects are at peak usefulness on the long days of summer, one might suspect that the peak month for the commercial operation date would be just before those summer months.

However, as seen above, the timing for these projects is very similar to natural gas pipelines, with over 50% of all projects going into commercial operation in the last quarter of the calendar year.

Putting All of the Data Together

The annual report for 2021 was just released earlier this month by the EIA, and we can combine it with the historical data to create a projection for solar capacity for the remainder of this year, as well as for the next two years. 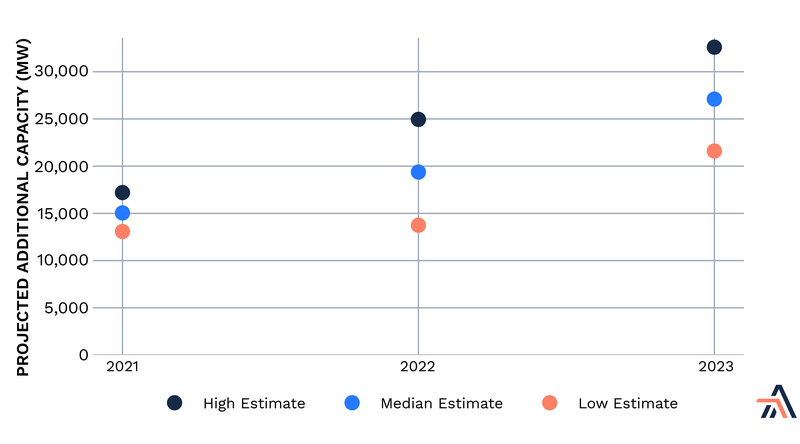 As seen above, we are projecting that by the end of 2021, there will be an additional 15,000 MW of nameplate capacity added to the nation’s supply of solar power. That would make 2021 a record year, but would likely be the minimum that would be needed for the coming two decades if the country is to reach the president’s stated goal of net-zero carbon emissions by 2050. However, it does seem as if the industry is on target to set records in each of the next two years as well. Whether that growth can be sustained for twenty consecutive years will determine whether the country can lead the advanced economies on carbon emission reduction on a path like that identified by the IEA in its report.

If you would like to discuss your data needs about any type of power generation, please contact us.

FERC Set to Vote on First Pipeline Expansion Projects Since Chairman Glick’s Elevation
Return on Equity is Very Different for Gas and Liquids Pipelines
EQT and Range Rebuff Senator Warren’s Efforts to Turn Up the Heat on the Gas Industry
COP26 Confirming Expectations - A Growing Role for Gas in Generation, but Not for LDCs
Repurposing Pipelines for the Evolution - Landowners May be a Bigger Issue than FERC

Return on Equity is Very Different for Gas and Liquids Pipelines