Will LNG Exports Be the Growth Engine for U.S. Producers?

The IEA’s path to net-zero by 2050 shows a starkly different result for North American LNG exports than even the worst-case scenario offered by the EIA.

Properly predicting the future growth of LNG may impact the ability of planned projects to reach a final investment decision, but could also impact the prices of domestic gas because, if producers are counting on LNG to be the growth engine for demand, its importance is magnified.

The EIA cases may be painting a rosy picture because even the worst-case scenario for the next 30 years projects much higher LNG exports in 2050 than does the IEA’s path to net-zero. Both projections are based on assumptions about policy changes that seem unrealistic. But we should know in the near future which assumptions are more accurate as the proposed U.S. LNG terminals either announce final investment decisions or further delay them.

In International Energy Agency Lays a Path to Net Zero, we began a discussion of the International Energy Agency’s (IEA) recently released report that identifies a path for how the world’s economies can reach a goal of net-zero emissions by 2050. As we explained, the IEA believes that most plans to reach net-zero carbon emissions by 2050 are not nearly aggressive enough to meet the stated goal and that if the goal is to be achieved, immediate action by all nations is required.

Each year, the U.S. Energy Information Administration (EIA) releases its long-term energy outlook, and today we compare that outlook’s projections in one key area, LNG exports, to the IEA’s path to net-zero by 2050. As we discuss more fully below, the comparison shows that the IEA’s path paints a starkly different result for North American LNG exports than even the worst-case scenario offered by EIA.

In the EIA report, LNG exports provide a key growth opportunity for U.S producers. But in the IEA report, there is no such growth and, in fact, that report notes that by 2050, exports from North America return to levels that existed in 2012 -- which is before the U.S. was even in the export business. Accurate projections of LNG export growth may impact the ability of planned LNG export projects to reach a final investment decision, but could also impact the prices of domestic gas because, if producers are counting on LNG to be the growth engine for demand, its importance is magnified.

The IEA report shows that the need for LNG grows almost exponentially between today and 2025, but that it then suffers almost as much of a decline in the following five years. 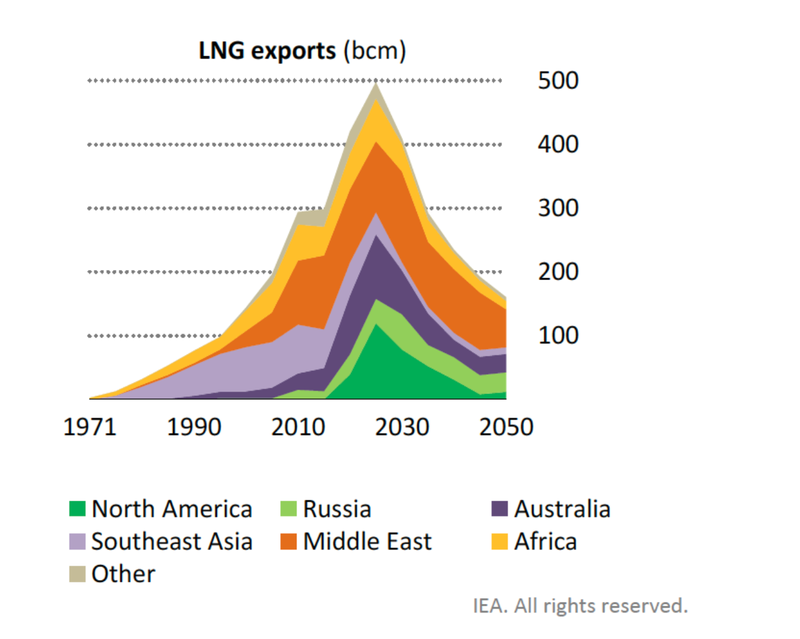 As seen above, the IEA report provides that, on its path to net-zero, the export of LNG falls so precipitously after 2025 that by 2050 the amount of LNG exported from North America is back to levels comparable to 2012, when the U.S. was not really even in the export business. The IEA summarizes this projection by stating that the global LNG trade will increase from 420 billion cubic meters (bcm) in 2020 over the next five years, but it will then fall to around 160 bcm in 2050. As to the impact on export terminals, the IEA report states bluntly that none of the LNG liquefaction facilities currently under construction or at the planning stage will be needed to meet this projected growth between now and 2025.

In Lower Carbon LNG – Will Others in the Supply Chain Help Achieve That Goal?, we detailed the large number of facilities that are chasing a limited supply of buyers, and projections like this may account for the delays that projects are experiencing in reaching a final investment decision. In that article, we also discussed the desire of buyers for a lower-carbon LNG, and the IEA report suggests that as a competitive advantage. It predicts that between 2020 and 2050, LNG demand will drop by 60% and the remaining demand will be met by the lowest cost and lowest emissions producers.

The EIA long-term outlook provides a number of scenarios, including its base case or reference case, a high oil and gas supply case, and a low oil and gas supply case. All three cases essentially agree with the IEA projections that show substantial growth in LNG exports between now and 2025. But from that point forward, the cases begin to diverge. 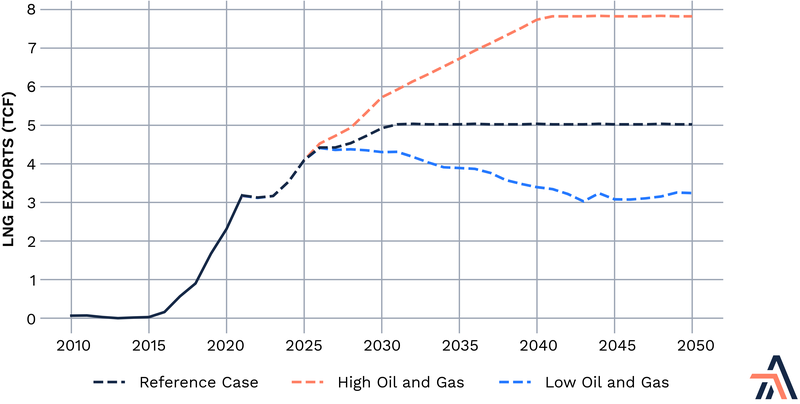 The key difference in these projections is the policy assumptions that underlie them. The IEA forecast is a projection of the results that can be achieved if a number of interlocking changes in behaviors, policies and practices are all pursued and implemented on an admittedly aggressive schedule. Conversely, the EIA projection assumes no changes in current policies. Neither of those assumptions is likely to be correct. However, what is clear from a comparison of the EIA’s “worst-case scenario” is that the situation could be far worse for the U.S. LNG market if the world can close the commitment gap highlighted in the IEA report.

The one certainty about projections is that they are almost always wrong. However, that does not mean that they do not provide key information. In particular, evaluating the best and worst-cases allows those responsible for long-range plans to adopt strategies that would optimize results in all scenarios. In this case, we may know sooner rather than later which scenario will emerge as the most accurate. As the U.S. LNG projects all seek buyers, those buyers will be asked to sign long-term contracts for LNG from the facilities in question. The only way the precipitous fall in LNG exports shown in the IEA report will occur is if buyers simply do not sign contracts that allow the pending projects to move forward.

Conversely, if the LNG projects that have been approved by FERC and are still looking to reach a final investment decision are canceled or further delayed, that will likely be viewed as confirmation of the IEA’s prediction that none of them are needed. If that is the case, the industry may want to adjust its actions accordingly. And this may require a substantial adjustment.

As seen above, in the EIA’s reference case, the growth of the LNG export market is a key component of the demand growth for natural gas produced in this country, representing over 50% of the total growth between now and 2050. If that growth in demand does not materialize, it would have a tremendous impact on demand and prices paid for U.S. production, and may require a very different strategy for producers. Similarly, if that demand does not materialize, the value for capacity on pipelines designed to deliver gas to these export terminals will likely be much lower.

If you would like us to discuss other impacts on LNG from the IEA’s path, please contact us.

Will Gas Pipelines Embrace Hydrogen to Stay Relevant?
Should Bad Business Decisions Create a National LNG Export Crisis?
EQT and Range Rebuff Senator Warren’s Efforts to Turn Up the Heat on the Gas Industry
Permian is Both Overbuilt and Underbuilt Depending on the Product
EIA Says FERC Limiting Pipeline Capacity Will Distort Gas Markets But Not Impact Emissions

Permian is Both Overbuilt and Underbuilt Depending on the Product