Oil and Gas Leasing on Federal Lands -- When Does a Pause Become a Ban?

In testimony at the end of April before the Senate Committee on Energy and Natural Resources, the Biden administration representative acknowledged that there would be no oil and gas lease sales in the second quarter of this year.

While asserting that this is only a “pause” in the sales of leases, the administration asserted that any financial impact is likely years away, but curiously also admitted it has no evidence to back up that assessment. The governor of Wyoming asserted that the impact on his state will be immediate and that the “ban” will cause developers to move to states where gas and oil is located on private lands and ultimately benefit foreign producers.

We think the “pause” will continue for the foreseeable future and perhaps for the entirety of the Biden administration unless the courts weigh in on the issue, which they so far have not done. The impact of the pause will fall most heavily on the producers with interests in Wyoming and New Mexico, and on those states’ respective budgets, and the impact will occur much sooner than the Biden administration is claiming.

In testimony at the end of April before the Senate Committee on Energy and Natural Resources, the Biden administration representative acknowledged that there would be no oil and gas lease sales in the second quarter of this year, following the suspension of the sales that had been scheduled for the first quarter. While asserting this is only a “pause” in the sales of leases, the administration asserted that any financial impact is likely years away -- but curiously also admitted that it has no evidence to back up that assessment. The governor of Wyoming asserted that the impact on his state will be immediate and that the “ban” will cause developers to move to states where gas and oil is located on private lands and ultimately benefit foreign producers.

Today we look at some of the testimony and how the parties represented differ on whether this is a “pause” or a “ban” on leasing, and also what impact the action, whatever you may call it, might have on the revenues of the states where land is mainly owned by the federal government, as in Wyoming and New Mexico. We also discuss how the parties have a very different perspective on how quickly the action could cause financial harm to the producers in those states and to the revenue of those states.

What Did the Biden Administration Do?

Soon after he took office, President Biden issued Executive Order 14008, “Tackling the Climate Crisis at Home and Abroad,” which he said was designed to restore balance on public lands and waters consistent with his goals related to climate, conservation and clean energy. That Executive Order directed the Secretary of the Interior to “pause new oil and gas leasing on public lands and in offshore waters” while the department completes a comprehensive review and reconsideration of federal oil and gas permitting and leasing practices. Part of that review is designed to assess whether the royalty rates used are appropriate, but also to take into account the “climate impacts of the program.”

In her Senate testimony, the Bureau of Land Management’s (BLM) Deputy Director of Policy and Programs, Nada Wolff Culver, stuck with the claim that this is merely a pause in the leasing program, but also acknowledged that the bureau had canceled all lease sales scheduled for the second quarter of this year and that no decision had been made about future quarters. This answer was designed to support the administration’s legal argument because the statute clearly requires that the BLM hold quarterly sales of oil and gas leases on federal lands. However, she asserted that the statutory requirement had always been subject to the discretionary action of the Secretary of Interior to delay sales. Finally, she assured the senators that the report from the comprehensive review would be completed by early this summer.

The Financial Impact to the States and to Producers

As we discussed in Would a Biden Drilling Ban Help EQT and Other Major Gas Producers? in October 2020, the ownership of federal lands is not evenly distributed across the states, and the vast majority of the lands on which oil and gas leases have been granted are concentrated in five states, New Mexico, Wyoming, North Dakota, Colorado and Utah. This heavy concentration is reflected in the revenue reported as being received by the BLM from January 2016 to the present from its oil and gas leasing program.

As seen above, since January 2016, more than half of the total revenue from the BLM’s federal lands leasing program has been from leases located in New Mexico and almost another quarter of that revenue is from leases in Wyoming.

State of Wyoming Is Very Concerned

The governor of Wyoming, Mark Gordon, also testified to the Senate committee, and the main point of his testimony was the same one we made when we discussed this issue back in October. Namely, that the “ban” -- as he referred to it -- will have zero impact on climate change as it does nothing to reduce demand for oil and gas, but instead will benefit those producers that produce from privately-owned lands and the states in which they operate. This, he asserted, was to the great detriment of states like Wyoming and New Mexico. Ms. Culver dismissed the financial impact on states by stating that, in fiscal year 2020, federal onshore oil and gas development provided over $3.46 billion in revenues, and only $92.9 million of that was in bonus payments derived from lease sales, and only $23 million was derived from rents. While these numbers appear accurate, they are somewhat misleading. We set forth below the composition of the payments made for onshore federal land leases since January of 2016. 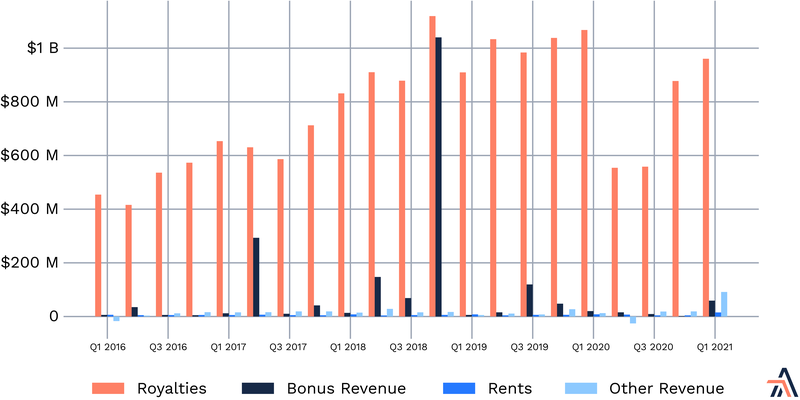 As seen above, the amount of revenue from bonus payments, which are derived from lease sales, was unusually low in fiscal year 2020, most likely due to the economic conditions in that period. Over the longer horizon above, the bonus payments represent over 13% of the program’s total revenues. Governor Gordon quoted similar statistics when he stated that since 2015, leasing revenues generated $474 million total for the state of Wyoming, with more than that going to the U.S. Treasury. In addition, total energy-related revenues from public lands in Wyoming generated $457 million in the last fiscal year for Wyoming. According to the governor, that income is the state’s single largest source of revenue for schools and other essential government programs. Finally, over the last eight years, Wyoming averaged $35 million annually from lease sales. Thus, while those numbers may not be meaningful in Ms. Culver’s mind, they certainly are for the state of Wyoming.

When Will the Impact Occur?

Ms. Culver noted in her testimony that, even without new leases being granted, revenue will not suffer immediately because most of the revenue, as seen above, comes from royalties paid on producing wells. She also noted that there is a large number of leases that have not yet been put into production to allow for continued drilling while the “pause” continues. Both Governor Gordon and the CEO of Occidental, Vicki Hollub, disputed both of those contentions.

First, Governor Gordon noted that land ownership in Wyoming is generally held in what he described as a checkerboard pattern, as shown in the following excerpt from the BLM map for lands in Wyoming. 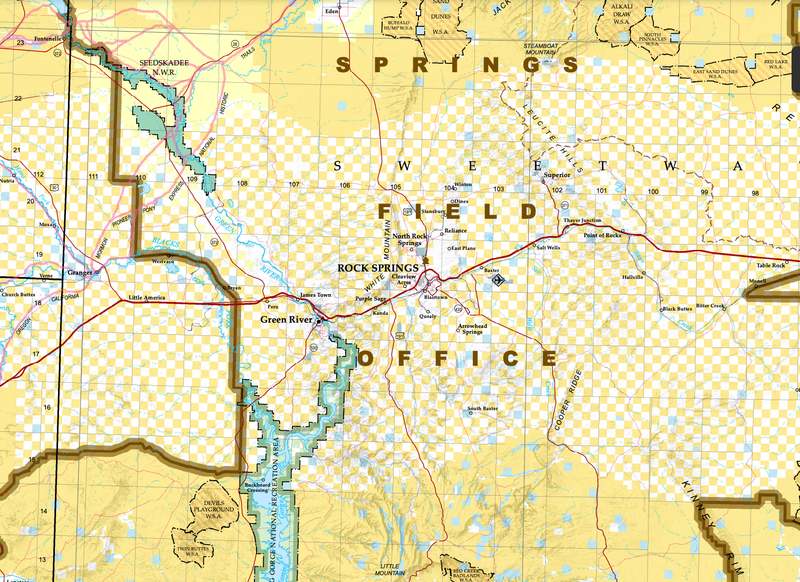 In the above map, the lands in yellow are owned by the federal government and managed by the BLM, and as indicated by the governor, those parcels alternate with privately-owned land. This creates a problem for oil and gas developers who may need to participate in multiple lease sales and then acquire private lands before they can commence drilling operations. So while there may be leases held by producers, those leases should not necessarily be considered an inventory of potential drilling sites because, without the acquisition of additional parcels in future sales, those leases may not be able to be prudently developed. So, according to Governor Gordon and Ms. Hollub, the impact of pausing lease sales could be immediate on plans that producers have spent years working on.

Where Does the Government Go from Here?

Ms. Culver promised that the report will be issued early this summer. We should then have a clearer idea of whether President Biden intends to keep his campaign promise of halting all new leases on federal lands or impose conditions that simply make such leasing uneconomic. There are three lawsuits that have already been filed challenging the ability of the administration to impose the “pause.” Two of those suits are in Wyoming and the third is in Louisiana. So far, these suits have not yet progressed to the point where all of the briefs needed to support the grant of a preliminary injunction have been filed, but they are on a path to reach that point shortly.

Whether the courts will order that sales go forward before the report is issued this summer is doubtful. But if the report suggests that the pause will go past the second quarter, we believe one or both courts may require the federal government to hold sales in the third quarter. As we have often discussed with regard to executive orders signed by President Trump, the courts are the final arbiter of whether an executive has violated a statute. The statute, in this case, appears to be fairly clear in directing that sales be held quarterly, and while a court may allow a pause, we don’t expect these lower courts, at least, to allow something that goes beyond that.

If you would like to look more deeply into the impact of the pause on a particular producer, please contact us.