President Biden announced the high-level details of his "infrastructure" plan.

The spending set forth in the plan is a key indicator of where the Biden administration will be putting its focus during the remainder of its term.

The plan essentially has morphed into a jobs plan that has limited spending on true infrastructure. The plan also abandons key promises on which President Biden campaigned that would have kept the natural gas industry and pipelines relevant for decades. Whether it passes in Congress will likely turn on the views of centrist Democrats like Conor Lamb of Pennsylvania, whose district President Biden chose for his announcement of the plan.

Early Wednesday, the Biden administration released a fact sheet on what had been advertised as his infrastructure plan, but which, interestingly, is titled “The American Jobs Plan.” The administration should be given some credit for honesty in advertising because the single biggest expenditure proposed in the plan has absolutely nothing to do with infrastructure. Today we provide an overview of the spending and tax increases proposed in this plan and set forth areas where we expect to dive deeper in the coming months as this plan works its way through Congress.

Overall, the plan abandons key aspects of the infrastructure plan on which President Biden campaigned and which would have benefitted the natural gas industry. Instead, it appears to be a wholesale adoption of electrification through renewables as the preferred path to a zero-carbon future. It is interesting that he chose to unveil the plan in Pittsburgh, Pennsylvania, the heart of the Marcellus/Utica formation, but it is perhaps telling that the union member that introduced him was an electric lineman and not a construction or gas field worker.

For a campaign whose slogan was Build Back Better, the fact that the title of its supposed major infrastructure plan makes no mention of either building or infrastructure is telling. A look at the spending in the plan shows that the single biggest proposed expenditure has nothing to do with infrastructure, but is the $400 billion proposed to be spent in raising the wages paid to workers providing home- or community-based care for aging relatives and people with disabilities. While there is a lot of money in the plan for what would be considered traditional infrastructure, that spending is only a quarter of the total $2.2 trillion that is described in the White House Fact Sheet. 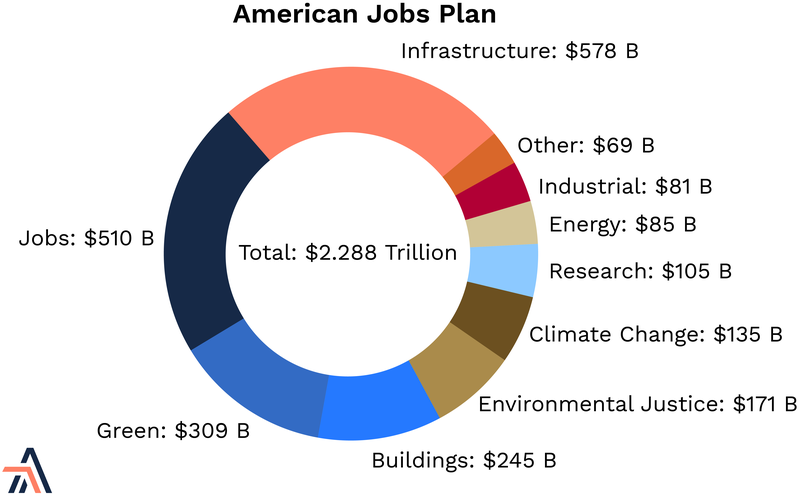 As we have categorized the spending in the above chart, Infrastructure spending does come out on top, but it is only about 25% of the total proposed spending. Equal amounts are spent on jobs, including that $400 billion for home care spending, and the combination of green, climate change and environmental justice spending.

In our pre-election review of the Biden campaign’s platform, Would Electing Biden Doom the U.S. Oil and Gas Industry?, we noted that the campaign was “walking a fine line in trying to appease the left-wing of his party while not alienating key swing voters in states like Pennsylvania and among unionized labor, who tend to work in the heavy industries that could be impacted by an overly aggressive environmental agenda.” In particular, we noted that the campaign’s plan to reach net-zero by 2050 would be based on “technology-neutral standards” that could include all zero-emission sources like hydroelectric power, geothermal, existing and advanced nuclear, but also “carbon capture and storage.”

Similarly, we noted that the campaign’s plan included a major investment in the gas distribution systems around the country through the use of “targeted support for repairing and replacing aging distribution systems while creating thousands of new jobs.” In addition, the campaign’s plan included a focus on carbon-free hydrogen, which, as we discussed in Can Natural Gas Pipelines Facilitate a Conversion to Hydrogen as a Fuel?, would allow for a continuing role for the pipeline infrastructure in this country. Sadly, there is little in the Jobs Plan for these programs that are key to the continued relevancy of the natural gas industry.

That technology-neutral standard has been replaced with what appears to be a full-on bet on electrification supported by renewable energy, including the supposed 30 GW of offshore wind that the president promised on Tuesday would be built by 2030. In the above chart, the portions identified as “buildings” are almost entirely designed to be retrofits of structures to allow them to operate efficiently on purely renewable sources of power. Then there is the $444 billion for green and climate change-related projects. Then within the energy category, $69 billion of that is for the electric grid.

There is no mention at all of repairing or replacing natural gas distribution systems to reduce methane emissions, nor of the jobs that such a program would create. In fact, the only methane reduction program is the remaining $16 billion in the energy category for a program to plug oil and gas wells and restore and reclaim abandoned coal, hardrock and uranium mines.

The only mentions of carbon capture and storage come in two very small projects that involve use of the technology for retrofitting large steel, cement, and chemical production facilities in environmental justice communities and as part of a plan to invest in demonstration projects in various areas including utility-scale energy storage, hydrogen, advanced nuclear, rare earth element separations, floating offshore wind, biofuel/bioproducts, quantum computing, and electric vehicles. Even hydrogen, which is a key component of the net-zero plans in the rest of the world, is mentioned only twice in these small programs that include carbon capture and storage.

Paying for These Investments

While the expenditures called for in the plan are to be spent over an eight-year period, the revenue increases included in the plan will take fifteen years to generate the offsetting revenue. There are three revenue changes that would seem to be particularly relevant to the domestic energy industry. First, the plan calls for an increase in the corporate tax rate from the current 21% to 28%. Second, the plan would enact an alternative minimum tax on large corporations that would be equal to 15% of a corporation’s income as reported for financial purposes, so-called “book income.” Third, the plan claims that it would eliminate billions of dollars in subsidies, loopholes and special foreign tax credits for the fossil fuel industry that are supposedly found in the current tax code.

Where This Goes From Here

It is interesting to note that President Biden announced this plan in the Congressional District of Conor Lamb, a centrist Democrat from the state of Pennsylvania. Given the narrow Democratic majorities in the House and Senate, it will be crucial for this plan to have the backing of the centrist Democrats in both chambers. Given Mr. Lamb’s previous support of the natural gas industry and the plan’s complete abandonment of that industry, it will be crucial to gauge his support and that of Senator Joe Manchin from West Virginia. We expect this is the opening salvo of a negotiation with those centrists and we will continue to follow the key aspects we discussed above as the plan is introduced into Congress and moves toward passage.