The move toward a net-zero goal by 2050 for the entire U.S. economy (and worldwide) has taken on a life of its own. Regardless of changes in the political winds in Washington as companies commit and investors demand a strategy for achieving that or very similar goals, our nation’s existing 200,000 miles of gas pipeline infrastructure could be well-positioned to play an integral role.

For pipeline companies, an inspirational strategy and detailed plan exists outside the U.S. The gas transmission company for New Zealand has laid out a detailed plan to evolve by enabling the country’s conversion to hydrogen, which preserves a robust role for its assets. The company’s plan recognizes that as the transmission pipeline, it can play a central role in preserving the need for pipeline infrastructure by diversifying its vision beyond delivering only natural gas. It also recognizes that its plans need to start “straightaway” if it is to survive. We suggest that U.S. pipelines can play a similar role in this country and use New York state as an example.

In Gates and Buffett: A Bridge to the Future for the Gas Industry?, we discussed the overall goal of moving to a net-zero carbon emission economy by 2050 and how difficult that will be to achieve. However, we also noted that in the plans laid out in Bill Gates’s book on the topic, he barely makes mention of the incumbent owners of pipeline infrastructure, both at the transmission and distribution level. In Biden Abandons Campaign Promises as Infrastructure Plan Becomes a Jobs Plan, we discussed how the new administration also makes no mention of the incumbent pipeline companies in discussing its future infrastructure plans. Instead, the Biden administration appears to be going forward with a robust electrification strategy that could leave a limited role for pipeline companies beyond 2050.

Facing a similar existential threat, the only gas transmission company in the country of New Zealand recently issued a detailed, over 200-page plan that lays out how its existing assets will enable a conversion to hydrogen between now and 2050 that will enable a lower cost and more resilient net-zero carbon future for that country. Today we provide a brief overview of the key aspects of that plan and propose that similar plans could be developed around this country and use New York as an example. The natural gas pipeline industry may need to reimagine its role as not being tied to a particular form of energy, natural gas, but as really being the provider of a transportation corridor that is more resilient and applicable to a broader array of users.

Firstgas is a privately held company owned by First Sentier Investors and operates the entire gas transmission system on the North Island of New Zealand. In November 2019, the New Zealand government passed the Zero Carbon Act, which committed the nation to reduce its carbon emissions to achieve net-zero emissions by 2050.

In apparent recognition of the existential threat this posed to a company whose sole purpose is transporting carbon-emitting fuels, Firstgas commissioned a study to determine whether it was feasible for it to help meet this goal by converting the entire natural gas infrastructure of the country to a hydrogen gas system by the 2050 deadline. That report was issued earlier this year, but unlike many such reports, it does not simply set forth a goal for thirty years in the future but identifies the key steps that need to be taken along the way, including many that must begin “straightaway” if that goal is to be a reality.

Why the Pipeline Company?

While the report does not identify the motives of the company for embarking on this process, the scenarios it discusses would indicate a key one, namely that there would be almost no need for a natural gas transmission pipeline in a deeply electrified economy that relied on wind, solar, pumped storage and batteries to meet the net-zero goal. Also, as the transmission company, Firstgas is in the unique position of having the information needed to address most of the thorniest issues that face a natural gas system looking to convert to a hydrogen delivery system. While the U.S. has not been nearly as decisive in setting a national goal for having a net-zero economy by 2050, other market forces are leading in that direction and the question may well be whether the natural gas pipeline operators in this country can embrace a broader view of their role by focusing on their key assets and skills and not merely the product they transport. In other words, can the Interstate Natural Gas Association of America become the Transmission Corridor Association of America?

At a high-level, Firstgas’s proposed timeline is designed to meet the goal of net-zero by 2050 by essentially converting the entire natural gas delivery system within the country to a hydrogen delivery system by that date, but it also has a number of interim steps that must be met if that goal is to be achieved.

While the first high-level milestone does not occur until 2030, the required steps in phase 1 between now and then are set out in further detail throughout the report. The study shows that these interim steps are essential, and many must begin straightaway if there is to be any chance of achieving the ultimate goal.

As seen in the above project plan, the process involves almost every aspect of Firstgas, but also includes outside parties such as the local distribution companies and the regulators. While the report focuses on the next ten years, it also identifies key developments that need to occur at all levels of the gas supply chain over the coming thirty years to make this conversion a reality. These developments include transitioning to hydrogen-ready home appliances that can be converted to hydrogen use through a simple technician visit to the home, retrofitting of various components of the local distribution company’s network, and key changes to the compressors used by the transmission company. While the report acknowledges that this transition will not be cheap or easy, for those in an asset-based business, the thought of needing to deploy growth capital should not be viewed as a downside, but, rather, an upside.

The Benefits of a Robust Hydrogen Network

The key benefit not mentioned in the report, of course, is the survival of the business of the transmission company itself, but there are other public benefits identified throughout the report when comparing a hydrogen/electric economy to a primarily electric-only economy. The three key benefits of such a blended approach identified in the report are:

The last two benefits are derived from a key feature of hydrogen, which is that it is a stable gas, that, once produced, can be stored in very large quantities that allow it to be called upon when other sources of energy are not available. For the incumbent pipeline industry, this means that existing storage fields and the pipelines that connect them to the rest of the pipeline network would continue to have value beyond 2050.

Applying a Similar Strategy to the U.S.

While the pipeline system of New Zealand’s North Island is extremely small (less than 1,600 miles of transmission lines) compared to the U.S. pipeline system (almost 200,000 miles of interstate transmission lines), that simply means that the issue is probably even more pressing here than it is in New Zealand. Hopefully, the business development and engineering groups at U.S. pipelines are already deeply engaged with the local distribution companies to both understand their desire and timeline for blending and converting to hydrogen and how the current pipeline infrastructure can assist in that endeavor.

New York as an Example

The two major New York City local gas distribution companies have made very different commitments with regard to carbon, with one of them being very similar to that of New Zealand. National Grid has stated that its goal is to be net-zero by 2050, including emissions that result from the sale of electricity and gas to its customers. It has also stated that it sees hydrogen playing a major role in the next few decades and is focusing on producing and blending it into its existing gas network, and developing a transition plan that will lay out the changes required in the existing gas infrastructure.

Consolidated Edison has not been as explicit, but has committed to reducing carbon in the natural gas stream, including by being an anchor sponsor in the Low Carbon Resource Initiative, which is seeking to develop and commercialize technologies that will allow greater use of innovative, low-carbon fuels like hydrogen.

A quick look at the New York State energy map shows that there are plenty of in-place assets that could be used to facilitate a transition with the natural gas pipeline companies playing a key role in developing any such plan. 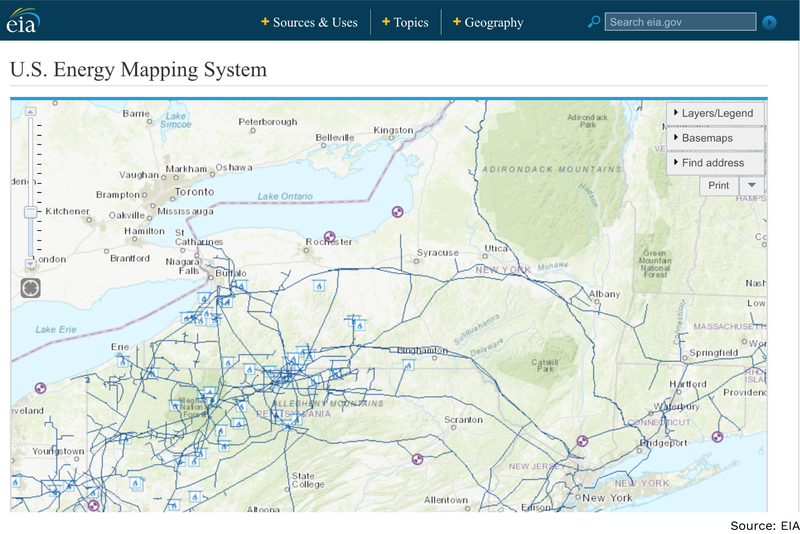 The map above shows that New York has two nuclear facilities located on Lake Ontario (two circles). Both of those facilities required support from the state government to remain in operation, but the one to the east is actually three different units, two at Nine Mile Point and one at the Fitzpatrick Plant, which, combined, have over 2100 MW of capacity and have licenses to operate that don’t expire until 2029, 2034 and 2046. While Firstgas does not include nuclear power as a “green” source for hydrogen, these existing plants clearly were not needed for the electric grid and could be repurposed to jumpstart hydrogen production in the state while other green sources are built.

As can be seen, there are interstate pipelines in the northern part of the state with Berkshire Hathaway’s Eastern Gas Transmission being the closest. Similarly, the state has a number of natural gas storage facilities that could be converted to hydrogen use and which have pipelines that could bring that hydrogen either from the northern part of the state or the storage fields to New York City, where it would most likely be needed.

While none of that conversion would be simple, the companies that embrace the change first may be in the best position to win the business and receive the key unstated benefit of the Firstgas strategy, which is survival as a business.

If you would like a copy of the Firstgas plan or to discuss these issues in greater detail, please contact us.

Hydrogen Has No Role in the Path to Net-Zero if Environmental Purists Have Their Way
Repurposing Pipelines for the Evolution - Landowners May be a Bigger Issue than FERC
Greatest Risk to Future of Renewables — State NIMBYism
Solar Power is Growing – But Not at the Rate Developers Often Project
U.S. Energy Systems Are on a Razor’s Edge, But Aliso Canyon, MVP and Line 5 May Benefit