Environmental purists are pushing an agenda that will accept as the only viable path to net-zero emissions a plan that requires deep electrification of the entire economy and the attendant increase in generation and transmission such a plan requires.

By insisting on a single solution and rejecting all other paths, the purists would foreclose participation by existing incumbents in the natural gas industry and the existing gas infrastructure. But more importantly, the insistence on a single solution, which is politically fraught, means that the achievement of their stated goal is put at risk.

A solution like those being considered around the world that incorporates the use of the existing natural gas infrastructure to support the development of blue hydrogen as an interim solution on the way to a robust use of green hydrogen creates a more viable path that may actually achieve the goal of net-zero by 2050.

Arbo™ recently participated in a multi-day conference (video below) regarding the future of hydrogen as a critical element on the path to net-zero by 2050. While much of the conference was dedicated to the technical aspects of creating and distributing both blue and green hydrogen, our focus was on the policy, regulatory and legal hurdles that a robust hydrogen economy faces here in the U.S. A key risk we discussed was the agenda in the U.S. of what we described as the environmental purists who are pushing, as the only viable path to net-zero emissions, a plan that requires deep electrification of the entire economy and an almost exclusive reliance on wind and solar to generate that power. Such a solution to the net-zero goal is a risk to the future use of hydrogen because it leaves no room for hydrogen, as either a fuel for residential heat or cooking, or as a fuel for transportation, which are two key functions that the rest of the world is planning on hydrogen playing.

By insisting on a single solution and rejecting all other paths, the purists would foreclose participation by existing incumbents in the natural gas industry and the existing gas infrastructure. But more importantly, the insistence on a single solution puts the achievement of the stated goal at risk. Even those who support the deep electrification path admit it requires a substantial increase in solar and wind generation in a very short period. But more importantly, as we discuss today, such a plan would also require a tremendous increase in high voltage transmission lines, which history indicates is unrealistic within the time frames needed for such a solution to work.

What Does Deep Electrification Require?

One of the most fully developed studies that support a deep electrification path for the U.S. was a report issued late last year by a group of researchers from Princeton University titled Net-Zero America: Potential Pathways, Infrastructure, and Impacts. In the forward to the study, John P. Holdren, who served as the Science Advisor to President Obama and Director of the White House Office of Science and Technology Policy from 2009 to 2017, acknowledged that none of the “Princeton scenarios will prove to be ‘right’, but together they provide a compelling picture of possible paths forward.” However, as we discussed in our conference presentation, all of those paths rely on a deep electrification of the U.S. economy, and that is a serious problem. Even the moderate plan discussed in the Princeton study that allows for a continuing use of natural gas and nuclear as a generation source would require land use nationwide for wind and solar equal in size to the entire states of Illinois, Indiana, Ohio, Kentucky, Tennessee, Massachusetts, Connecticut and Rhode Island. Moving to the path that relies almost entirely on wind and solar to generate electricity would increase the land area needed for wind and solar by 70%, which means adding in the total land area of the states of Nebraska and Kansas.

But that land area does not even include the land needed for the electric transmission lines that would be needed to bring that electricity from where it would be generated to the demand centers where it would be used. According to the Princeton study, for the environmental purists’ path relying almost exclusively on wind and solar, the U.S. would need to grow its current high voltage grid more than five times over by 2050 to support the transmission of the electrical generation from its sources which are typically far from the demand centers. Even between now and 2035, the high voltage system would need to grow by 151% compared to our current system.

But that is negligible compared to what will be needed by 2050 to meet the purist path of all wind and solar supporting a deeply electrified economy. According to the Princeton report, such a path would require the construction of a grid 5.3 times as big as the current grid between now and 2050. As seen below, this grid will mainly be designed to bring wind and solar power from states that in the last election voted primarily for President Trump (red color) to those states that voted for President Biden (blue color) and will need to cross a number of states that neither get the benefit of the new wind and solar construction nor need the power that requires the construction of this huge grid. 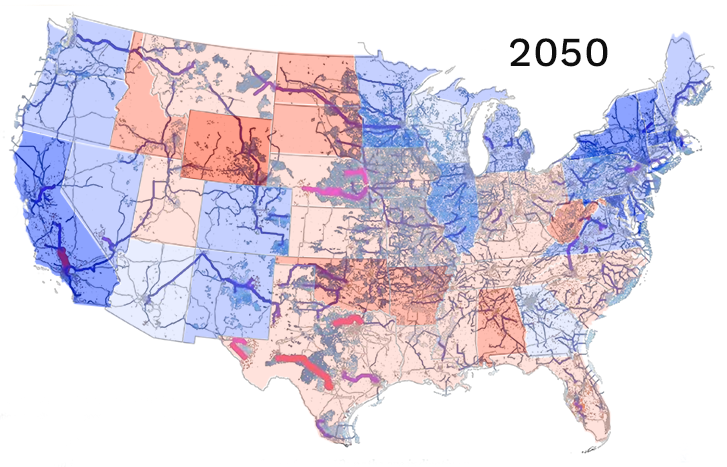 It is this tremendous need for new transmission in such a short time period that makes us question whether the purists’ plan is even remotely feasible. A report issued last November by Americans for a Clean Energy Grid, a non-profit coalition focused on the need to expand, integrate, and modernize the North American high voltage grid, noted that since 2014, the U.S. has built or moved to the planning phase just three interregional high voltage line projects, and that includes the “planned” TransWest Express project that we will discuss in greater detail to highlight why the plan for 2035, which is a mere 14 years from now, seems unrealistic. During the same time, China has constructed or moved into the planning phase 260 such projects and Europe has done the same for 44 projects.

Unlike for natural gas pipelines where FERC has authority over the siting and construction of all interstate pipelines, there is no central authority for interstate electric transmission lines. Despite this fact, in a recent interview, the current FERC chairman expressed confidence that FERC has all of the authority it needs to ensure that a grid capable of meeting the president’s goal of a 100% clean electric generation grid by 2035 can be achieved. According to Chairman Glick, he thinks the goals are realistic because, as with past goals that “everyone says we could never do it” but then the country achieves those targets and usually much quicker than people had predicted.

The TransWest Express Transmission Project (TWE) is an overhead high-voltage transmission system that will extend 732 miles from Wyoming to Nevada and will interconnect to existing bulk power system facilities in Wyoming, in Utah, and at two locations in Nevada. The project consists of three linked segments that include: (1) a 405-mile, 3,000 MW, 500 kV high-voltage direct current system between Wyoming and Utah; (2) a 278-mile, 1,500 MW, 500 kV high-voltage alternating current (HVAC) transmission line between Utah and Nevada; and (3) a 49-mile, 1,680 MW, 500 kV HVAC transmission line in Nevada. It is designed to reliably and cost-effectively deliver approximately 20,000 GWh/year of clean and sustainable electric energy generated in Wyoming to Arizona, Nevada and Southern California.

The project entered the rating process with the Western Electricity Coordinating Council (WECC) on September 7, 2007, submitted a study on October 5, 2009 and was moved to phase two by WECC on February 2, 2010. WECC did not formally approve the project until November 17, 2017 — more than ten years after the project first began the process at WECC.

On a somewhat parallel path, TWE submitted an application to both the U.S. Bureau of Land Management (BLM) and the Western Area Power Authority (WAPA) for permission to cross lands owned by them. Those two agencies announced their intent to prepare an EIS on January 4, 2011. On October 5, 2011, the Obama administration announced that TWE was being included in a pilot program to “expedite” the review process for needed transmission lines. Despite the benefit from being included in this “streamlined” approach, the draft EIS was not issued until July 13, 2013 and the final EIS was not issued until April 30, 2015. The approval of the two agencies didn’t come until December 13, 2016 for the BLM and January 17, 2017 for the WAPA. Note that all of these dates were within the jurisdiction of an administration that favored such projects. Imagine how long it might take in an administration that does not.

The project also needed approval from local and state agencies and received those on December 19, 2018 and April 19, 2019, respectively, fourteen years after it was first conceived, and more than six years after its original projected in-service date. The project came to FERC through an application filed on December 11, 2020 seeking approval from FERC to allow the company to sell transmission capacity at negotiated rates based on the results of an open and transparent bidding process. TWE stated that it intended to conduct that process as early as March 1, 2021 and asked FERC to issue its order by February 15, 2021. In a unanimous decision, FERC approved that request on February 26, 2021 and the bidding process commenced on June 7, 2021. However, according to that solicitation for bids, the expected in-service date is now 2025, a full two decades after the project was first conceived.

It is this extended process that creates a substantial risk that the purists’ dream of a wind-and-solar-only solution will fail to achieve the stated goals of a clean electric grid by 2035 and a net-zero economy by 2050. But that risk also is an opportunity for those entities supporting alternative paths, including ones that robustly use blue and green hydrogen, to demonstrate that they can more realistically achieve the goal of net-zero by 2050 in a manner that the International Energy Agency has identified as being the “most technically feasible, cost‐effective and socially acceptable” alternative.

If you would like to keep informed about TWE or other high voltage transmission projects, email us.

Pipeline GHG Emissions
Which States Will Fail to Meet Their Offshore Wind Goals?
Coming Soon - SEC to Weigh In on Climate and Maybe ESG Disclosures
Pipeline Revenues Plateaued in 2020
Inflation Reduction Act Takes an All of the Above Approach to Climate Crisis

Which States Will Fail to Meet Their Offshore Wind Goals?