On Tuesday of this week, in a bipartisan vote of 69-30, the U.S. Senate approved the Infrastructure Investment and Jobs Act, which now moves to the U.S. House. It is an enormous piece of legislation, marking the imperative to invest in infrastructure of all types, including energy. Implementation will impact all levels of government, the economy, and our focus — the energy evolution.

Infrastructure is perhaps the only type of spending that could generate bipartisan action in this political era. While electrification and anything connected to emissions reductions is the focus for the bill’s energy sector investments, programs, and new and revised laws, it notably includes opportunities for hydrogen, natural gas and propane as future fuels, and pipelines as covered infrastructure for improvement and expansion. There are opportunities for existing asset owners.

Passage by the Senate is the first step towards a massive investment in the future, and the Act is more inclusive of existing energy assets than pre-compromise talking points. We view this as a positive development, as it creates opportunities for proactive infrastructure companies interested in evolving existing assets to leverage government funding programs. However, the Act also requires those companies to seek out, develop and actually participate in the opportunities offered for hydrogen, pipelines and carbon sequestration.

On Tuesday of this week, in a bipartisan vote of 69-30, the U.S. Senate approved the Infrastructure Investment and Jobs Act (Act), which now moves to the U.S. House. We will let others provide commentary on the politics that led to the Act’s passage in the Senate and its chances of approval in the House. Our focus is on extracting the commercial opportunities for customers, and for that reason this Act cannot be ignored. It is an enormous piece of legislation, marking the imperative to invest in infrastructure of all types, including energy. Implementation will impact all levels of government, the economy and our particular focus — the energy evolution.

Infrastructure is perhaps the only type of spending that could generate bipartisan action in this political era. Electrification and anything connected to emissions reductions is still the focus for much of the Act’s energy sector investments, programs, and new and revised laws. However, the Act is more inclusive than pre-compromise talking points. It includes directives, grants and research dollars for planning, researching and developing hydrogen as a green fuel, as well as large government appropriations to build carbon capture and sequestration technologies and infrastructure, and even directives to study infrastructure for refueling electric, hydrogen, natural gas, and propane vehicles. We view this as a positive development and believe the Act will create opportunities for proactive infrastructure companies interested in evolving existing assets to leverage government funding programs. However, it also requires those companies to seek out and actually participate in the opportunities offered for hydrogen, pipelines and carbon sequestration.

The Act is a successor, in part, to President Biden’s American Jobs Plan that we discussed in Biden Abandons Campaign Promises as Infrastructure Plan Becomes a Jobs Plan. As we noted there, much of the Biden plan had absolutely nothing to do with infrastructure. In addition, that plan abandoned key aspects of the infrastructure plan on which President Biden campaigned. Instead, it was a wholesale adoption of electrification through renewables as the preferred path to a zero-carbon future. The Act is similar in some ways, but significantly different in other ways. While labeled as an infrastructure bill, there are still a lot of new appropriations that fund things other than capital structures built with concrete and steel. Also, while advertised as a $1.2 trillion investment, the Act appropriates, as confirmed by the Congressional Budget Office, new spending of less than half of that amount.

As seen above, we have divided the new expenditures into various categories based on the purpose for which they have been appropriated. Most categories are simply big buckets of money allocated for a particular purpose, but the dollars we categorized as “Designated Expenditures” are more like the classic earmarks for pet projects of individual members of the Senate.

As seen above, the total new dollars being appropriated is $449.6 billion and not the $1.2 trillion being advertised. The remainder of the money was already in existing budgets and therefore was not scored by the Congressional Budget Office as an increase. Also, it should be noted that the money is not all appropriated in the coming fiscal year.

As seen above, the Congressional Budget Office projects that the dollars being counted as new will take more like a decade to be fully appropriated.

We have further broken down the money which we designated as being for the energy evolution. 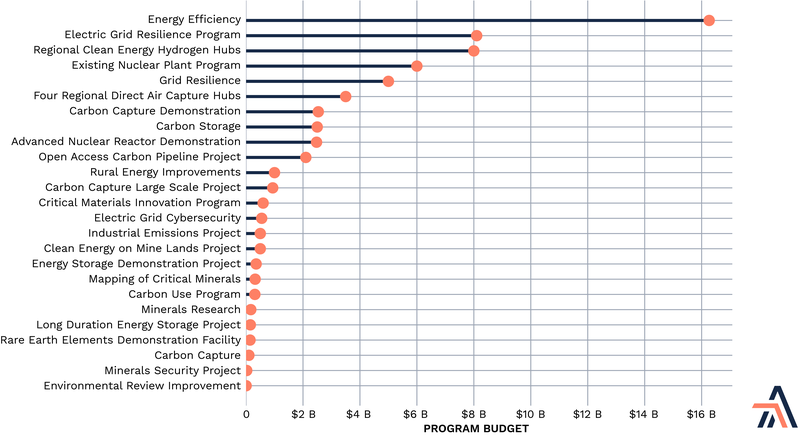 As seen above, a substantial portion of the dollars being appropriated is for energy efficiency projects and electric grid enhancements. But unlike the Biden plan, the Act has been shaped by a bipartisan group of senators and now includes substantial new appropriations for incumbent asset owners in the nuclear, natural gas and pipeline industries.

In Will Gas Pipelines Embrace Hydrogen to Stay Relevant?, we noted the IEA’s call for global hydrogen use to increase from the current 90 Mt to 500 Mt by 2050. We also suggested that the U.S. should get a plan in place like Europe’s “Hydrogen Backbone” if hydrogen is to play a major role in our path to net-zero. The Act requires such a plan.

One section of the Act directs the Department of Energy to accelerate the research, development, demonstration, and deployment of clean hydrogen by:

Goals are delineated and the establishment of targets is directed for:

As a further effort to leverage existing natural gas systems, Regional Clean Hydrogen Hubs are created and encouraged to be in regions with the greatest natural gas resources. The Act appropriates $8 billion for all of the above programs over the next four years.

Another section of the Act addresses carbon capture, utilization, storage and transportation infrastructure. The Act states that carbon capture and storage technologies are necessary for reduction of hard-to-abate emissions from the industrial sector, and recognizes that capture, removal and utilization technologies require infrastructure to scale and create “an interconnected carbon management market.”

In what could be considered the raison d’etre for this whole bill, this section recognizes the need for public funds to catalyze private investment due to the size of the capital investments needed to create a market that does not yet exist at scale. In a phrase that departs from usual legislative jargon, the Act calls this the “chicken-and-egg” challenge facing carbon capture.

Federal investments for technologies in this area will flow via grants to states, localities, public utilities and any of their respective private sector partners in amounts escalating from $41 million in FY 22 to $69 million in FY26. An additional amount of $100 million is added for infrastructure deployment.

In addition to grants, the Act establishes a secured loan and contract spending program called the Carbon Dioxide Transportation Infrastructure Finance and Innovation program (CIFIA), funded with $900 million appropriated over four years. And finally in this area, $2.5 billion is appropriated for carbon storage commercialization.

Recognizing this type of government financing wasn’t required for the shale revolution, the existing industrial base may need to ramp and adjust its business and project development efforts to further shape and participate in these programs. Just because appropriations are made for large grant and lending programs doesn’t mean the monies will ultimately be obligated and expended to achieve programmatic goals.

Another program relevant to natural gas established under the Act is designed to accelerate the creation of refueling infrastructure. In the Biden plan, this was going to be limited to electric recharging stations. But the Act takes a much more inclusive approach and would apply the grant program not only to electric charging infrastructure, but also to hydrogen, propane and natural gas fueling infrastructure. This will start as a report to evaluate alternatives and future investments. The report is to include issues “such as lack of pipeline infrastructure, that may impede deployment of alternative fuel vehicles.”

Time to Act is Now

We should note that many of the provisions regarding hydrogen and carbon capture and storage refer back to programs first proposed in 2005 and which were apparently never fully implemented. While it is certainly encouraging that the bipartisan group of senators was able to enlarge the purpose of the legislation to include programs that are for more than just wind and solar and electric transmission, the industry will need to participate in these programs and prove that these technologies can be part of the energy evolution or risk being left behind by the “all wind and solar electrification” crowd.

If you have an interest in Hydrogen, Gary Kruse, Arbo MD of Research, will be presenting at the First Element conference on September 9th. Registration is free.

Biden Abandons Campaign Promises as Infrastructure Plan Becomes a Jobs Plan
Will the Changing Need for Pipelines Drive a New Revenue Model?
It’s Infrastructure Week and Money is on the Table for Existing Pipeline Companies
Eight Billion Reasons for a Bit of Bipartisanship
The More Things Change … Applying Learnings from Gas Build Out to Renewable Energy

Eight Billion Reasons for a Bit of Bipartisanship