Biden Course Corrects on Hydrogen and Carbon Capture and Sequestration

Carbon capture and sequestration appears to be back in the plans of the Biden administration.

The decarbonization of difficult areas of the economy presents an opportunity for existing owners of pipelines and natural gas storage fields to participate in what some estimate to be a $2 trillion market in 2040 and which will require over $680 billion of capital investment through 2050.

ExxonMobil has announced a $100 billion plan to make Houston a world hub for sequestration and storage, and that area certainly has some key advantages. But there are other areas of the country that will need similar investments, as well, and which could include the use of the existing assets of numerous pipeline and storage companies.

In early April, we noted in Biden Abandons Campaign Promises as Infrastructure Plan Becomes a Jobs Plan that the Biden administration seemed to have abandoned the campaign’s promises of promoting both green hydrogen and carbon capture and sequestration (CCS) as part of its plans for reaching net zero emissions by 2050. Just a few weeks later, in conjunction with Earth Day, the administration announced its goal of achieving a 50-52 percent reduction from 2005 levels in economy-wide net greenhouse gas pollution by 2030. Those plans, unlike the prior plans, embraced both green hydrogen and, as we discuss today, CCS.

A stable and supportive governmental view of the value of CCS is believed by many to be critical to the development of this new industry, so this change in the administration’s view is significant. In fact, just days before the president’s announcement, ExxonMobil announced, in a blog post on its energyfactor website, a $100 billion dollar collective effort involving both industry and government to build a CCS hub in the Houston area. ExxonMobil noted that Houston had key features that made it ideal for the creation of such a hub. Today we look at the status of CCS and look for other areas of the country that may have similar features that would also lend themselves to the development of this new industry, which could allow for participation by other natural gas pipeline and storage companies beyond those in Texas.

In his Earth Day announcements about setting aggressive goals for decarbonizing the economy in this country, President Biden returned to his focus on high-paying union jobs that had been part of his campaign’s energy plan, and announced that, as part of his plan to reach 100 percent carbon pollution-free electricity by 2035, he would be supporting the carbon pollution-free energy potential of power plants retrofitted with carbon capture and addressing carbon pollution from industrial processes by supporting carbon capture and hydrogen to power industrial facilities.

This is a welcome change, because as we noted in Gates and Buffett: A Bridge to the Future for the Gas Industry?, electrification is not a practical solution for many portions of the economy, and especially those in what Mr. Gates describes as the “making things” category. In its own announcement, ExxonMobil also stated that governmental policy was critical. It applauded President Biden’s decision to rejoin the Paris Agreement, but also noted that the International Energy Agency has said that “reaching net-zero [emissions] will be virtually impossible” without CCS. Therefore, it was fully supportive of new policies that would spur the investment needed to deploy CCS on a pace and scale to meet the Paris Agreement goals. According to ExxonMobil, that would include a durable regulatory and legal environment, and policies that enable CCS to receive direct investment and incentives similar to those available to other efforts to reduce emissions. Finally, it encouraged the government to establish a market price on carbon to provide the needed clarity and stability required to drive that investment.

For the last three years, ExxonMobil has been assessing the concept of multi-user CCS “hubs” in industrial areas located near geologic storage sites, such as depleted oil and gas reservoirs. It believes that Houston has two features that make it an ideal site for such a CCS hub in that it has many large industrial emission sources, and it is located near geologic formations that could store large amounts of CO2 safely, securely and permanently. ExxonMobil’s choice of Houston could also reflect just a bit of self-interest, because when you look at the largest industrial class CO2e emitters in the country, ExxonMobil’s facility in Baytown, just outside of Houston, was the nation’s highest emitter in 2019. However, they are right to be looking for areas of the country with high CO2e emissions and large geologic formations that could be repurposed to safely store the CO2 that is captured from these industrial facilities.

Looking for Other Opportunities

We gathered the data collected by the U.S. Environmental Protection Agency about CO2e emissions from all industrial emitters, excluding underground coal mines, that emitted at least 200 thousand metric tons in 2019, and we calculated the total emissions by state.

As seen above, ExxonMobil is certainly correct that Texas has a key “asset” in that it is by far the country’s greatest industrial emitter of CO2e. But there are other states that have a similar asset base, including five midwestern states near the top of the chart: Indiana, Illinois, Ohio, Pennsylvania and Michigan.

The other key asset noted by ExxonMobil is nearby underground storage fields capable of storing the CO2 that is captured. A look into the data on that front shows a very similar asset base for these midwestern states, as well. 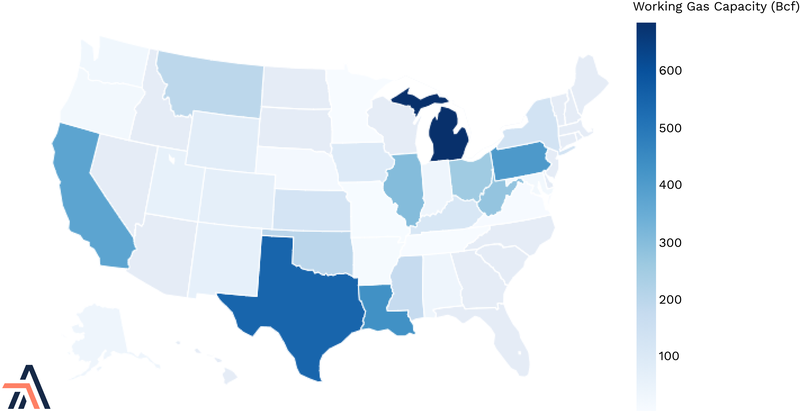 As seen above, four of the same five midwestern states that are near the top for CO2e emissions are also in the top ten for total working gas capacity for underground storage.

In a client note earlier this week concerning CCS, Credit Suisse stated that the addressable market is quite large, with less than one percent of carbon being captured today in the U.S. and globally. According to ExxonMobil, the future market could grow to $2 Trillion by 2040. Credit Suisse also noted that a carbon price would likely be needed to spur investment in the area, but found that the U.S. has a huge advantage by being home to roughly two-thirds of the geologic storage needed to sequester CO2, enough to store hundreds of years of CO2 emissions. Finally, Credit Suisse noted that midstream pipeline companies are well-positioned to capture a large share of the pipeline development that would be needed for full-scale CCS. It reported that the National Petroleum Council estimates full-scale CCS could require $680 billion of capital investment through 2050 to capture 20% of U.S. CO2 emissions.

If you would like us to provide you with a map overlaying these large industrial emitters in a particular state, with either pipelines or storage fields in those same states, please contact us.

What a Quarter, But What Lies Ahead for Midstream Legal Events?
Can the President Use the Defense Production Act to Combat High Oil and Gas Prices?
Will the Supreme Court Bar EPA from Regulating Greenhouse Gasses?
Energy Security with the Energy Evolution - The Path to 2050 Will (Hopefully) be More Inclusive
New Fortress Energy Announces Aggressive Plans for New Offshore LNG Facility

Will the Supreme Court Bar EPA from Regulating Greenhouse Gasses?