Renewable natural gas (RNG) is viewed by many as a fuel of the future, along with hydrogen.

Local distribution companies and pipelines would like to attract the green features of RNG. But they worry that its differences from traditional geological natural gas could cause issues with their systems and so want to put additional controls on its access to their systems.

A few pipelines have dealt with these issues directly, but FERC recently refused to allow Berkshire Hathaway Energy’s Eastern Gas Transmission to make changes to its tariff that it claimed were designed to promote use of RNG, but at the same time protect its own pipeline and downstream users from any harmful aspects of this new source of gas. In the face of opposition by the RNG industry, FERC refused to allow the tariff change to be implemented, primarily because EGT had not shown the harm the new source of gas might cause, nor how its proposed change would actually protect its system from that harm. The lesson from that case for other pipelines worried about the introduction of RNG or hydrogen into their systems may very well be that pipelines should stay ahead of these issues and adopt universal standards for all gas flowing on their systems, rather than focusing on new sources.

Renewable natural gas (RNG) is supposedly a fuel of the future, along with hydrogen. Local distribution companies and pipelines would like to attract the green features of RNG. But they worry that its differences from traditional geological natural gas could cause issues with their systems and may seek to put additional controls on its access to their systems.

As we discuss today, there are examples of pipelines that have tariff provisions, approved by FERC, that are very similar to one recently proposed by Berkshire Hathaway Energy’s Eastern Gas Transmission (EGT). However, when EGT proposed its tariff, which it asserted was designed to encourage the development of RNG, the RNG industry came out strongly against the proposed tariff because it singled out RNG as being different from other gas and they felt it would limit access of RNG to the EGT system. Following a technical conference ordered by FERC, the Commission refused to allow EGT to make the requested changes to its tariff, even though EGT asserted that the changes were needed to protect its own pipeline and downstream users. Pipelines may need to adopt a different approach going forward and suggest standards that would apply to all gas on their system and not just RNG. A similar approach may also be necessary for standards that would apply to the blending of hydrogen, which is the other fuel of the future competing with RNG.

On its face, EGT’s proposal looked straightforward. It simply defined the terms “biogas” and “renewable natural gas” and provided standards that would allow raw “biogas” to be considered as pipeline quality “renewable natural gas.” These standards were for what EGT called “constituents of concern” that it maintained could be present in biogas but which were not typically present in geological natural gas, including ammonia, hydrogen, siloxanes, fluorine, chlorine, mercury, arsenic, copper and, finally, any other objectionable matter/particulates/biologicals. The proposal was a mix of the approach taken by two other pipelines that had already addressed RNG in their tariffs.

Northwest Pipeline has a very similar definition of biogas and RNG in its tariff, but then applies the general gas quality standards to such gas along with a requirement that RNG be “free from bacteria, pathogens, and any other substances injurious to pipeline facilities or that would cause the gas to be unmarketable.”

Eastern Shore Natural Gas, which filed in 2019 to include RNG provisions in its tariff, does not define the term “renewable natural gas” but does require gas “received at renewable natural gas injection receipt points” to be commercially free from hazardous waste, solid or liquid matter, dust, gums and gum-forming constituents, microbiological organisms, or any other substance which might interfere with the merchantability of the gas, or cause injury to or interference with proper operation of the lines, meters, regulators, or any other facilities through which it flows. In addition, Eastern Shore’s tariff has specific quality requirements for gas received at such points for its heating value, Wobbe number, carbon dioxide, oxygen, nitrogen, total inerts, hydrogen sulfide, siloxanes, sulfur and water. Interestingly, these are the only gas quality standards in Eastern Shore’s tariff, and for all other gas, other than that received at RNG injection points, the tariff defaults to the standards imposed by the upstream pipeline.

Eastern Shore received no real opposition to its proposal. Similarly, Northwest Pipeline made some minor amendments to its original proposed tariff and then actually received support from the Coalition for Renewable Natural Gas (RNG Coalition) which was the leader of the organized opposition to EGT’s proposal.

EGT’s proposal was the subject of immediate objection by the RNG Coalition, which says it represents 258 companies and organizations that produce more than 95% of the total volume of renewable natural gas in North America, including facilities that connect, or intend to connect, to the EGT system. FERC suspended the tariff change for the maximum five-month period and set a technical conference. At that technical conference, the RNG Coalition asserted that pipeline access is critical to RNG delivery, and the delivery of RNG is critical to the decarbonization of the pipeline system. They objected to EGT’s proposed tariff because in their view it was overly restricting RNG’s access to the pipeline.

According to the data maintained by the RNG Coalition, there are currently a total of 42 such facilities currently under construction, and 61 in the advanced planning stages. 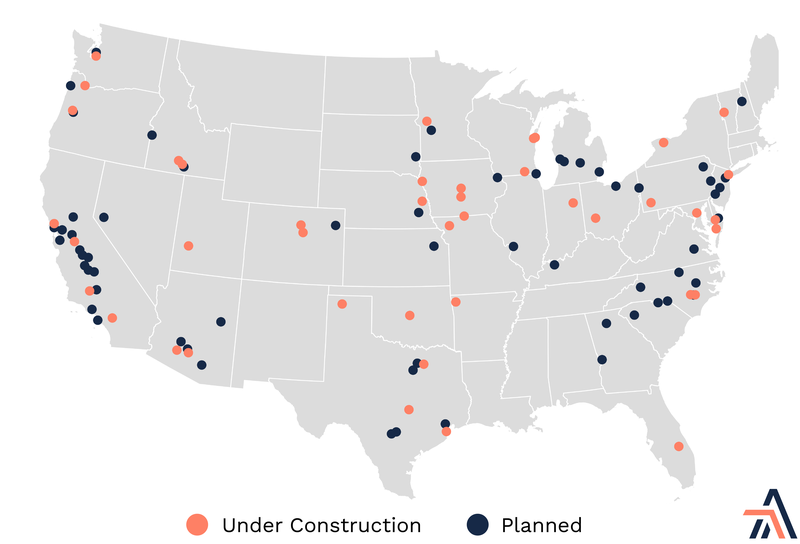 As indicated in the FERC order that was issued on April 30, there was no consensus reached during the technical conference, and the parties submitted initial comments and reply comments. After considering the comments received from the parties, FERC, in an April 30 order, unanimously denied EGT’s request to change its tariff. That decision was primarily based on a finding that EGT had failed to show that: (1) the constituents in RNG about which it is concerned would cause a specific problem on its system; (2) the proposed tolerance levels would solve the problem; and (3) there are not lower-cost or lower-impact solutions.

Should Other Pipelines Be Concerned About RNG?

As we noted above, both Eastern Shore and Northwest Gas have addressed RNG directly in their tariffs. Other pipelines have taken similar approaches, with Mojave Pipeline and Ruby Pipeline both specifying that biomethane, which is derived from biogas, must be free from bacteria, pathogens, and any other substances injurious to utility facilities or that would cause the gas to be unmarketable and otherwise must conform to the other gas quality provisions in its tariff.

Other pipelines use the definition of the word “gas” to limit the introduction of RNG. Thus, both DTE Midstream and Maritimes & Northeast limit the gas on their systems to combustible gas consisting of a combination of natural gas produced in its natural state after extraction of any constituents other than methane, vaporized liquefied natural gas and manufactured, reformed, or mixed gas consisting essentially of hydrocarbons of the quality and character produced by nature in petroleum, oil and gas fields with physical properties such that when the artificial gas is commingled with natural gas, the two become indistinguishable. Tennessee Gas goes one step further and specifically includes gas derived and recovered from biomass, such as dairy-derived biomethane, methane recovered from a landfill, or methane recovered from a wastewater treatment facility, such that when it is commingled with natural gas, the two become indistinguishable. But in total, that is only seven of the interstate pipelines in the entire country.

Based on the discussion in the EGT proceeding, it does not seem that this should be a major concern to most pipelines, however. The RNG Coalition noted that on EGT’s system, it is currently transporting 6,700 dth/day of RNG and estimates that an additional 2,000-3,000 dth/day of RNG will be added over the next five years, which equates to less than one-quarter of one percent of the total volumes EGT transports. 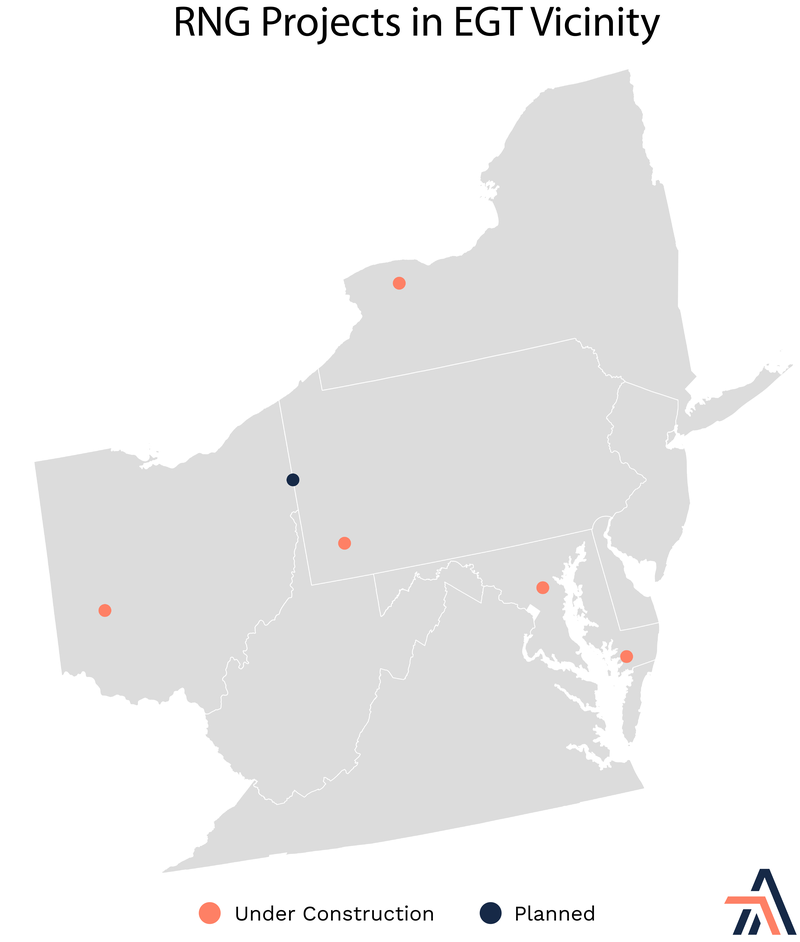 Interestingly, this demand on EGT’s system is similar to the RNG Coalition’s estimate for the entire industry. In a presentation made at the FERC technical conference, the RNG Coalition asserted that it expects a 30% annual growth rate in RNG output between today and 2025, but even with that likely optimistic projection by an RNG trade group, the U.S. total projected production would be only 230 Bcf/year or about 3/4th of 1% of the entire natural gas market.

In Is Blending Hydrogen with Natural Gas Already Allowed on Northeast Pipelines?, we discussed how pipelines may want to get ahead of attempts to blend hydrogen into the natural gas transported on a pipeline. The decision in this EGT case supports that view because addressing such issues before there is organized opposition, like the RNG Coalition, to quality changes may make that process smoother. In addition, the amount of hydrogen expected in the future would appear to dwarf the amount of RNG, based on the projections offered in this case.

If you would like us to identify the RNG facilities near a particular pipeline system, please contact us.

Hydrogen Has No Role in the Path to Net-Zero if Environmental Purists Have Their Way
Will Gas Pipelines Embrace Hydrogen to Stay Relevant?
Repurposing Pipelines for the Evolution - Landowners May be a Bigger Issue than FERC
Decarbonization: Applying New Zealand’s Hydrogen Pipeline Strategy to the U.S.
FERC May Tip Its Hand on Certificate Policy Statement Changes