Which States Will Fail to Meet Their Offshore Wind Goals?

The average time it takes for an offshore wind farm to move through the regulatory process appears to be at least 11 years, and more like 14 years.

States along the Atlantic coast have recently adopted very aggressive offshore wind goals through 2035, without taking into account this long regulatory approval process.

The goals for offshore wind in the states of Maine, Connecticut, New York and New Jersey are unachievable. These states need to adopt a more realistic goal or risk an over-reliance on a critical energy supply source that could lead to poor decisions about the need for natural gas-fired power plants, whose continued operation could allow for a much longer transition period to such offshore wind sources.

Most of the states in the Northeast have set goals for the amount of electricity to be generated by offshore wind power going out to 2035. As we sit here in late 2020, that time frame seems far out into the future, but as we discuss below, the regulatory process required to plan, site and construct a wind farm offshore means that, if a project is not currently under consideration, it is very unlikely that it will be available before 2035. Therefore, we are able to grade each state on the likelihood it can meet its goals -- and the results are not good. It is likely that the only states that will reach their goals are Massachusetts and Rhode Island, and the state with the most aggressive goal, New York, is on track to meet only 20% of its goal. If Maine, Connecticut, New York and New Jersey do not quickly adjust their over-reliance on this key power source, they will all be at risk of inadequately planning for power from other sources like natural gas.

The Energy Policy Act of 2005 (EPAct) authorized the Bureau of Ocean Energy Management (BOEM), which is part of the Department of Interior, to issue leases, easements and rights-of-way to allow for renewable energy development on the Outer Continental Shelf. EPAct requires BOEM to coordinate with relevant federal agencies and affected state and local governments, obtain a fair return for leases and grants issued and ensure that renewable energy development takes place in a safe and environmentally responsible manner. Under regulations first enacted in 2009, BOEM's renewable energy program occurs in four distinct phases: planning, leasing, site assessment, and construction and operations.

BOEM provides this overview of its review process to show how long each of these phases is expected to take: 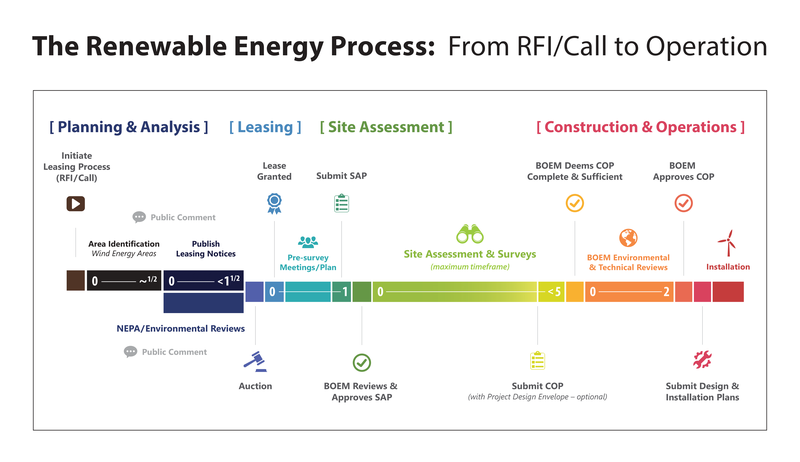 As seen above, the time frame from start to in-service is expected to take around 11 years. We can’t assess the accuracy of this estimate because, to date, not a single project has made it through all four phases. BOEM has issued an expected decision date for only one project, the Vineyard Wind project. The project anticipates that all environmental approvals will be received in early 2021. Assuming a two-year construction period, which appears consistent with the developer’s expectation that the project won’t be in service until October 2023, that would mean the project will have taken over eleven years from when BOEM first announced it was looking at leasing the area for a wind farm. That time frame is consistent with the high-end of BOEM’s chart, but it is also very fast compared to the other projects that are currently pending before BOEM.

The timeline for the Vineyard Wind project is detailed below.

We have looked at the time frames for the other Northeast projects working their way through the BOEM process, and we detail below the current range of dates for these processes. Note that almost all of the projects have only completed the first two steps, and so the other phases are essentially estimates, based primarily on the “projected” in-service dates announced by the project applicant. But as we have learned from our analysis of pipeline infrastructure project build out, and from Vineyard Wind, project applicants are almost always optimistic about in-service dates.

Between April 2010 and January 2013, BOEM issued its first notice about the possibility of leasing the areas in the ocean for the projects in the chart above. None of the projects has yet to be approved by BOEM to start construction and, as we stated above, only Vineyard Wind has even an estimated date for approval. Based on this history, it looks like the time from issuance of a first notice by BOEM to the actual in-service date will be about 14 years. That means that the projects currently being considered by BOEM, which include projects first noticed for lease in 2018, is pretty much a complete list of all projects that will go into service before 2035.

State Goals Out to 2035 Are Unlikely to be Met

To address the risks of climate change, states have been adopting energy plans that usually set emission goals out to at least 2050. However, many of these plans also provide specific interim targets for factors like the need to build and use offshore wind power to replace non-renewable sources of electricity. We have gathered the targets for the states along the Atlantic coast from New Jersey to Maine to see what their offshore wind goals are between now and 2035. We assess how likely they are to meet these goals, given that we essentially know all of the offshore wind farms that will likely be built between now and then. We set forth below each state’s goal and the amount of the power that will be available to that state from the wind farms that are currently under review by BOEM. For those projects that only recently began their review, we have assumed that it will take approximately fifteen years for them to go into service, meaning most of them will be fully online in 2034.

As seen above, only two of the six states are on target to meet their goals, but they are two of the three with the most conservative targets. Four of the states, including the three states that purport to be aggressively pursuing offshore wind, have no chance of reaching their goals. Based on the current projects, Maine will have no offshore wind by the end of 2035, far short of its 5,000 MW goal by 2030. New York, which has the most aggressive goal of all the states, will be lucky to reach 20% of its goal. Connecticut will only get to about 50% of its goal. Similarly, New Jersey, which recently more than doubled its goal, may reach the lower goal it already had, but not the recently doubled goal. There are 1800 MW of projects for which no state has been designated the recipient. This power would be enough to get Connecticut to its goal, but would not be enough to allow any of the other three states to reach its goal. All of these calculations assume that all of these projects actually get built and are on time. Given the scope of the projects and the untested processes needed for approvals, the likelihood of that seems remote.

It is unclear when this lack of ability to meet these aggressive goals will be recognized by these states. In the meantime, as we discussed in Rolling Blackouts in California; Will New York Be Next?, the downstate region of New York, which would be served by these offshore wind farms, continues to be served by natural gas and oil-fired power plants. It is very likely that the ability to retire these plants early will not be achievable, given what appears to be a complete lack of replacement power. As former Commissioner LaFleur warned about California, when disfavored energy sources are shut down before replacing them in “a heat wave, when every resource is needed, this gap in resources [comes] home to roost.” This lack of realistic goals will only exacerbate what is already a major risk to the downstate region in New York. Connecticut, New Jersey and Maine should also reassess their goals and adopt more realistic plans that can be achieved given the regulatory framework in which these offshore wind farms operate. That may very likely lead to a reassessment of the value of any natural gas-fired power plants that could allow for a longer glide path to any conversion to wind power.