U.S. Energy Systems Are on a Razor’s Edge, But Aliso Canyon, MVP and Line 5 May Benefit

In the past year, California has had rolling blackouts from a lack of supply-demand balancing, Texas suffered a week of power outages when cold weather caused a similar imbalance in supply and demand, and North Carolina ran out of gasoline when the primary pipeline it relies on for that commodity suffered a ransomware attack.

While each of these problems has its own root cause, the common thread is that the supply of energy products in this country is ignored until it is a problem and then the blame game begins.

There are a number of situations currently occurring throughout the country where legal and regulatory decisions could very well impact the future supply of energy to various parts of the country. In all of the cases, the decision-makers are being warned that they will be blamed when the next crisis occurs, but it is unclear if they will heed those warnings. North Carolina relies on a single pipeline for natural gas service and its refusal to approve Mountain Valley Pipeline’s extension could lead to a crisis similar to what it experienced for gasoline. Southern California relies primarily on the Permian Basin for its natural gas supply and the potential shutdown of the Aliso Canyon storage field would certainly lead to price volatility and perhaps supply shortages. Michigan is the largest user of propane in the country but is trying to shut down Line 5, which supplies the refineries that make that critical fuel. We should know more by the end of summer in all of these cases.

In the past year, California has had rolling blackouts, Texas suffered a week of power outages and North Carolina ran out of gasoline. While each of these problems has its own root cause, the common thread is that the supply of energy products in this country is usually ignored until it is a problem, and then the blame game begins. In International Energy Agency Lays a Path to Net Zero, we discussed the aggressive actions that must be taken by 2050 if the world is to avoid a predicted climate disaster. But there is an equally worrisome problem developing as decision-makers throughout government are threatening the current forms of energy delivery systems in an effort to bring about the change that they view is required. Such decisions have real-world consequences as the death toll in Texas alone was estimated to be over 100 from the power outages that the state experienced in February.

These most recent issues are beginning to be raised in some of the proceedings pending for both projects under consideration but also currently operating ones that are being threatened with closure. For now, it is too early to tell whether the impact of these recent outages will be enough to sway the decision, but as we discuss today, we will likely know by the end of summer what the outcome will be for three key projects: Mountain Valley Pipeline (MVP), Southern California Gas’s Aliso Canyon Storage Facility, and Enbridge’s Line 5.

In early May, the Colonial Pipeline, a crude products pipeline that supplies most of the southeast U.S., was the subject of a ransomware incident that caused it to shut down for days. That shutdown caused immediate impacts throughout the region, including causing more than 70% of all gas stations in North Carolina to run out of gasoline. In response to questions about what the administration was doing to address the problem, Energy Secretary Granholm acknowledged that the “best way to go” is to transport the needed fuel via the pipeline and so they were principally working with Colonial to quickly restore its operations.

While the crisis from Colonial was still going on, the North Carolina State Senate Committee on Agriculture, Energy and the Environment held a hearing where it was informed that North Carolina, in particular, was very susceptible to such disruptions. The testimony by a former chair of the North Carolina Public Utilities Commission from 2007 to 2019, Mr. Ed Finley, noted that such a disruption risk existed for crude products like those transported by Colonial, but also with respect to natural gas, because the state is almost wholly reliant on one pipeline, Williams’s Transcontinental Pipeline, for its entire supply of natural gas. A look at the interstate pipeline system for North Carolina clearly shows this concentration risk identified in the testimony.

MVP is now proposing to extend its pipeline into the state of North Carolina, through its Southgate project, but that project has been blocked by the North Carolina Department of Environmental Quality (DEQ) through a denial of a required water quality certificate. The head of the DEQ at the time that decision was originally issued is now the head of the U.S. EPA. Earlier this month, the North Carolina Senate refused to confirm his replacement as the head of the DEQ. While the exact reason for the Senate’s action is unclear, many suspect it is an indicator that the Republican-led Senate would like to see the Southgate project approved.

While North Carolina has a concentration of supply risk, it is not alone. Southern California is also very reliant on supply from a single basin, namely the Permian. 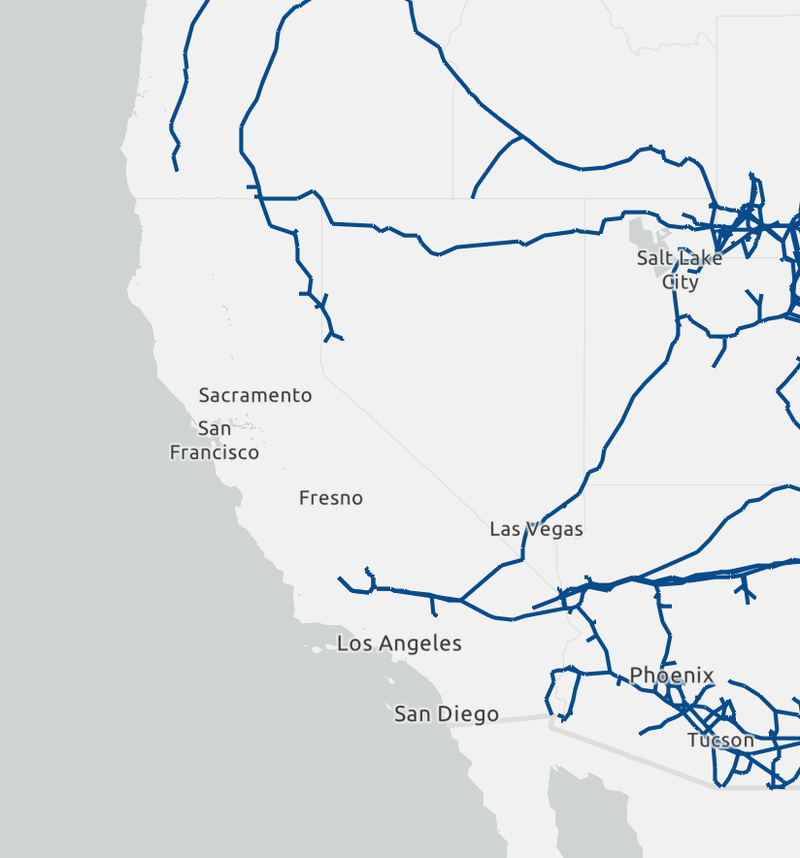 This reliance became crystal clear during the cold spell in February as prices at the Southern California Gas citygate climbed in response to the lack of supply. 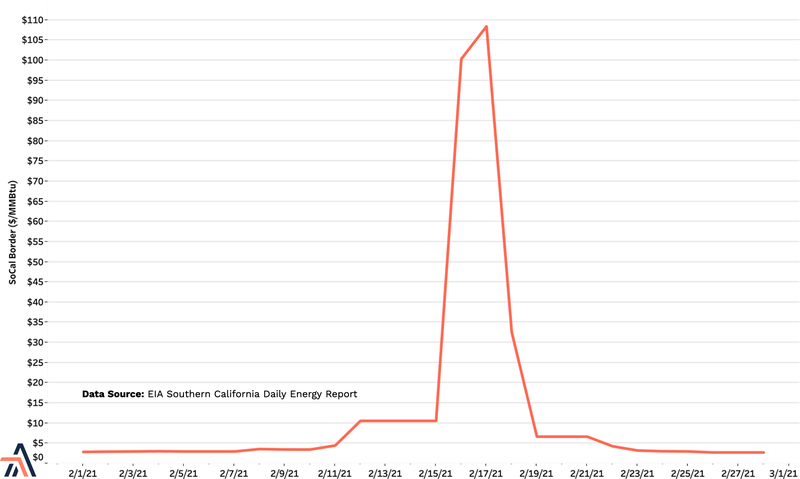 Despite this heavy reliance on a single basin, the California Public Service Commission is considering whether it should permanently shut down the Aliso Canyon storage facility, which acts as a critical buffer against price spikes and supply interruptions. It is under tremendous political pressure to order a shutdown, but is also being warned about the impact of such a decision. In fact, the administrative law judge considering the shutdown proposal currently has pending before him a motion to allow an increase in the operating capacity of the facility from 34 Bcf to 55 Bcf. According to the group of shippers who filed the motion, the winter storm that caused significant power outages in Texas also reduced the deliveries to SoCalGas to approximately 43 percent of design capacity on February 16, 2021. According to this group, the assumptions used to justify the current limits on Aliso Canyon’s usage are unrealistic, as they are much higher than the 43 percent experienced during a storm that was far beyond California’s border and which impacted a supply over which California has no authority. In addition, the motion argues that California is in a severe drought, which reduces its ability to rely on hydroelectric generation, and the possibility for more extreme weather conditions threatens the reliability of California’s intertwined power systems. A decision on this motion has been delayed until July. That delay alone increases the risk of adverse consequences this winter if Aliso Canyon cannot be filled prior to the onset of winter. We should know more about Aliso Canyon’s fate sometime in July.

The governor and attorney general of Michigan both ran in 2018 on a promise that they would shut down Enbridge’s Line 5 that brings crude from western Canada across the state of Michigan for use in refineries located in central Canada. Both candidates made good on that promise and began various efforts to achieve that result almost immediately upon assuming office. We have discussed their most recent efforts in DAPL and Enbridge Lines 3 and 5: Will the Litigation Ever End? The governor sent a notice of termination for an easement that allows Line 5 to cross the Straits of Mackinac and the determination of the validity of that notice is currently pending in a federal court in Michigan. Recent pleadings by the government of Canada and by certain trade associations highlighted the harm such a shutdown would cause. The Canadian government noted that it has relied on Line 5 since 1953 to transport vital fuels from producers in western Canada to users in central Canada (along with users in Michigan, Ohio and Pennsylvania).

According to Canada’s brief, the Toronto Pearson International Airport, Canada’s largest airport, is heavily reliant on Line 5 for its jet fuel supplies. The trade groups note that over the last decade, the Midwest region of the U.S. has increased imports of propane by 63% and it now supplies propane to the southern and eastern United States. The U.S. Department of Energy has identified supply loss to refineries in the Midwest as a vulnerability or threat to energy supplies to many states, including Michigan, Ohio and Wisconsin. In fact, Michigan uses more propane than any state in the country and depends heavily on in-state propane production facilities (at least one of which is dependent on Line 5), and also the Sarnia, Ontario fractionator (which is also fed by Line 5).

The impact of such a shutdown is not currently before the court considering the case, as the issues being fought over are mainly procedural. But the state’s efforts to shut down Line 5 would likely put tremendous stress on the markets in the Midwest and in Canada and could potentially impact supply itself. The court has a motion pending before it about whether the dispute should remain in federal court or be returned to state court where it was originally filed. In the meantime, the court has directed the parties to mediate the dispute and has received reports that those efforts remain fruitful. While the court could rule on the motion to return the case to state court at any time, we suspect it will likely withhold any decision on the pending motion as long as those mediation sessions continue to be productive.

We will likely know more about all of these cases by the end of this summer, but, at least for now, there is hope that each of the decision-makers is now aware of the impact on both the markets and the lives of the people that their decisions will have, and will take that into account when making these critical decisions.

If you would like to discuss any of these situations more fully to assess the risk, please contact us.

Decarbonization: Applying New Zealand’s Hydrogen Pipeline Strategy to the U.S.
U.S. Senators Are Concerned About FERC Delays — But Should Be Focused on Denials
Gas Pipeline Industry Dodges a Bullet with PennEast Win, But Spire STL May Lose Its Certificate
ACP Wins at the Supreme Court — Necessary But Not Sufficient for ACP and MVP
Repurposing Pipelines for the Evolution - Landowners May be a Bigger Issue than FERC