This is a changing dynamic for operators, as temporary volume incentive rates have begun to replace contract rates as the primary mechanism for the assessment of transportation fees. Transportation rates impact revenue for operators and expenses for shippers. Lower rates ultimately lead to reduced revenue for midstream companies, leading to an increased focus on controlling expenditures. This all means that unless and until U.S. production hits new highs, spot shipments incentivized by low transportation fees and low-capital brownfield projects will be the new normal for the crude oil pipeline business.

Pipeline transportation continues to be a buyer’s market where shippers hold much of the negotiating leverage, given their multitude of low-cost options. Additionally, crude oil asset teams should be evaluating all options, including partnering with competitors in order to increase their competitive advantages and enhance their value proposition to the shipper community. Arbo’s new Liquids Commerce Platform can help shippers and asset teams stay abreast of competitive market intelligence by making it easy to aggregate and assess rates and routes that are filed in critical corridors like Cushing to the Gulf Coast.

Since the end of 2019, crude oil midstream operators across the U.S. have been battling declining utilization on long-haul pipelines due to a confluence of factors, including declining supply, expiring throughput commitments and the addition of new pipeline capacity. This has led to a strategic shift for crude oil midstream commercial teams, who are now focusing primarily on maximizing the utilization and profitability of existing assets. This takes the form of brownfield projects, creative rate mechanisms and, in some cases, partnering with competitors who are facing similar headwinds.

The most recent example is Energy Transfer’s Cushing to Nederland joint tariff, which utilizes existing assets from affiliate entities Permian Express Partners and Sunoco Pipeline, as well as assets from competitor Centurion Pipeline. As we discuss today, this filing reveals the state of the current market for crude oil pipeline transportation and the types of creative approaches now required of commercial teams.

Last week, our customers using Arbo's Liquids Commerce Platform were alerted to a new long-haul route to the U.S. Gulf Coast: Energy Transfer (ET) and Centurion Pipeline posted a joint tariff movement from ET’s Cushing terminal to their Nederland terminal. The route primarily uses existing assets by connecting ET’s pipes in Oklahoma and Texas with Centurion’s pipeline that runs between the ET assets from Cushing to southwest Oklahoma.

In Permian Pipeline Overbuild Creates Capacity Bargains for Shippers, we discussed the overbuild of pipeline capacity from the Permian to the Gulf Coast. This new capacity has likely led to a reduction in flows from the Permian to the crude hub in Cushing. And a follow-on effect of Permian crude turning away from Cushing is lower demand for transportation out of the hub. Therefore, we suspect both of these operators have likely seen utilization declines in the past 18 months. Public data from the Texas Railroad Commission also suggests that the primary alternative routes for Cushing to U.S. Gulf Coast crude transportation -- MarketLink and Seaway -- have also seen significantly reduced utilization over the past year and a half.

Why then would an operator bring a new route into service when ample takeaway capacity already exists? It could be that both pipelines are trying to create new demand, because low flow is better than no flow. Creation of a joint tariff may indicate that ET and Centurion were facing significant utilization declines on their individual pipelines, and the market was giving no indication the trend would reverse.

By combining the pipeline segments under a joint tariff, the pipelines can create a route offering contiguous service from the Powder River Basin (via ET’s White Cliffs Pipeline joint venture) all the way through to the U.S. Gulf Coast. This enhances the ET offering by enabling flexibility to source crude from multiple origins across the U.S. through an integrated asset footprint and increases utilization for Centurion. Finally, ET’s new joint route ships only light crude. Competing pipelines Seaway and MarketLink ship both heavy and light crude, which can result in quality degradation for shippers of light crude. Depending on the shipper, light-only service may be an attractive differentiating factor for the new joint route.

According to Energy Transfer, the initial capacity of the new joint route is 65,000 bpd, expandable to 125,000 bpd. Based on the tariff filing, the rates range from a $0.65/bbl temporary volume incentive rate to a $2.00/bbl uncommitted rate, with committed rate tranches up to 65,000 bpd for 18 months. Using the Arbo Liquids Commerce Platform to analyze the alternative routes from Cushing to Nederland, we find that Seaway has posted a comparable incentive rate of $0.65/bbl. Given that both of these pipelines are using temporary incentive rates and are competing for the same uncommitted volumes, we can expect frequent changes and an ongoing competitive pricing battle between ET and Seaway for any available barrels out of Cushing. 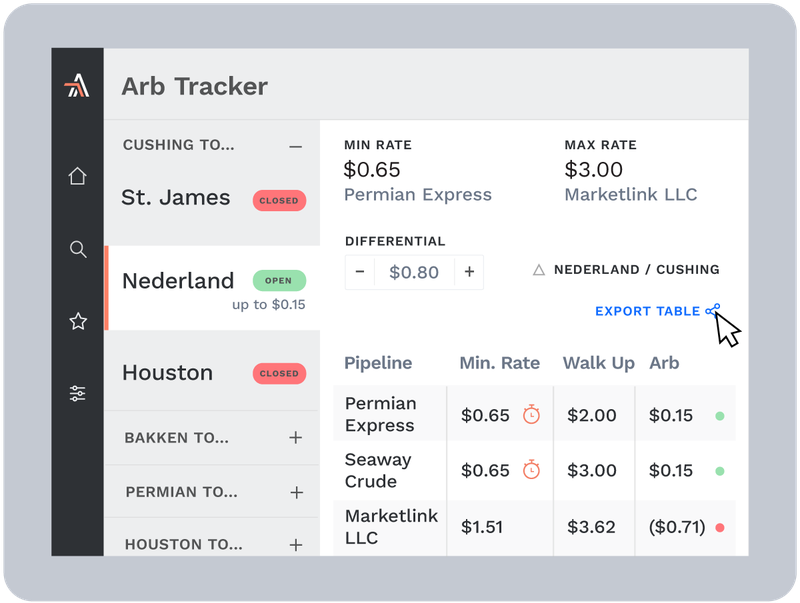 Common rate structures for crude oil pipelines include two rate tiers: committed (contracted) rates and uncommitted (walk-up) rates. Committed rates are negotiated between the pipeline and shippers, and are lower than the walk-up rate, which is the rate paid by any uncommitted shippers. There are other types of rate mechanisms such as temporary incentive rates, which are designed to encourage shippers to move more volume on an underutilized pipeline. To understand how temporary incentive rates work, let’s take a look at ET’s recent Cushing to Nederland joint rate:

As with committed rates, there are various incentive volume tranches resulting in different tariff rates being charged to the shipper. The primary difference, as noted in the above rate table, is these listed rates apply to uncommitted volumes. Effectively, this means any uncommitted shipper can achieve the above listed rates assuming that it ships the appropriate amount of crude in a given month.

Also notable about temporary incentive rates is that they can and do change frequently. As noted above, the listed rates are only guaranteed for the month of June, after which the rates could be changed (higher or lower) or cancelled entirely.

Because of their short-term nature and ability to be quickly changed, temporary incentive rates allow operators to respond to changing market conditions on a monthly basis. Additionally, they provide some insight into the market’s valuation of the given transportation service, which is influenced by pricing differentials and supply/demand dynamics.

Using the Arbo Liquids Commerce Platform we can take a look at the historical temporary incentive rates offered by Seaway along the same route as ET’s new joint tariff. As shown in the figure below, Seaway has posted monthly tariff changes offering a wide range of incentive rates - sometimes as low as $0.35/bbl. This illustrates a pipeline operator’s ability to respond to changing market conditions and to compete fiercely on price. 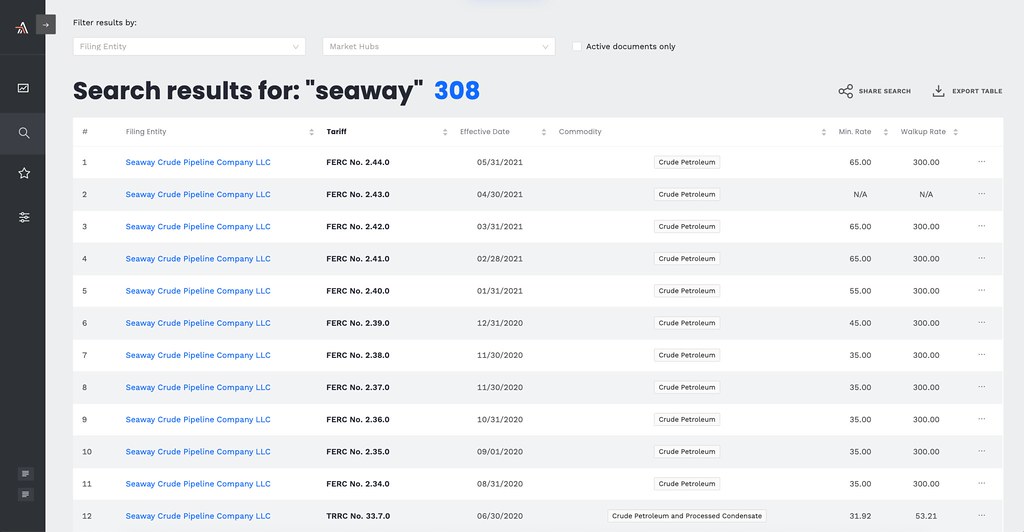 Base Hits - Not Home Runs

All this increased competition for volumes is generally good for shippers, as they can have their pick of transportation options without the burden of long-term commitments. However, for midstream operators, this has led to reduced revenues and, in turn, to reduced capital expenditures. Gone are the multi-billion dollar long-haul pipeline projects -- replaced now with a myriad of smaller brownfield projects and asset optimization initiatives.

This is a changing dynamic for operators across the industry, as temporary volume incentive rates are replacing contract rates as the primary mechanism for the assessment of transportation fees. This all means that unless and until U.S. production hits new highs, spot shipments incentivized by low transportation fees and low-capital projects utilizing existing assets will continue to be the new normal for the crude oil pipeline business.

Crude oil pipeline transportation continues to be a buyer’s market where shippers hold much of the negotiating leverage given their multitude of low-cost options. Prudent crude oil asset teams will be evaluating all options, including partnering with competitors to differentiate their offerings and enhance their value proposition to the shipper community. Arbo’s new Liquids Commerce Platform can help shippers and asset teams stay abreast of competitive market intelligence by making it easy to aggregate and assess rates and routes that are filed in critical corridors like Cushing to the Gulf Coast.