Will the Court Force DAPL to Shut Down?

An oral argument is set for November 4 on an appeal of a lower court decision that had ordered the Dakota Access Pipeline to shut down while the U.S. Army Corps of Engineers prepares an Environmental Impact Statement that supports its decision to grant DAPL an easement to cross the Missouri River.

If the appeals court appears likely to uphold the lower court’s decision, the lower court may once again issue an order as early as late December calling for DAPL to shut down, which would be a major disruption to the crude oil markets.

We do not think the appeals court is likely to reach the question of whether the lower court should order that DAPL be shut down. We also do not expect a decision by the appeals court until around March of next year. This will likely lead the lower court to refrain from entering any order that would require DAPL to shut down before that time. Therefore, flows on DAPL will most likely continue through at least the end of March 2021.

The day after the presidential election, the U.S. Court of Appeals for the District of Columbia Circuit (DC Circuit) is scheduled to hear an oral argument in a case that challenges the decision by the Trump administration to grant the Dakota Access Pipeline (DAPL) an easement to cross the Missouri River by directionally drilling beneath Lake Oahe. The lower court had ruled earlier this summer that the U.S. Army Corps of Engineers (USACE) should have prepared an Environmental Impact Statement (EIS) before it granted DAPL the easement, and it therefore voided the easement and ordered DAPL to shut down its pipe through the easement area and empty it of oil.

As we discuss below, one of many questions before the DC Circuit is whether the court can order the pipeline to shut down, even if it finds that the USACE must prepare an EIS. Given the current polarized political environment in the country, both sides, in this case, strive to characterize the question as a political one. But as we discuss below, we do not expect the three-judge panel that will hear the case to divide along partisan lines. Instead, we expect them to view this matter as a routine application of long-standing principles, which will likely benefit DAPL. In the end, we don’t expect the court will even reach the question of shutting down DAPL. Even if it finds that an EIS is required, it will likely provide guidance to the lower court on its authority, and send the decision back to that court for the crafting of a remedy while the EIS is prepared.

The planning, approval and construction of DAPL has been highly controversial for years. The main objection to the pipeline’s construction has been about its impact on the federally recognized Indian Tribes, successors to the Great Sioux Nation, and their ancestral homelands. The Tribes have fought the pipeline throughout the approval process, in the courts and even through physical protests during its construction. The lower court has ruled twice that the USACE failed to comply with the National Environmental Policy Act (NEPA) when it issued a permit for DAPL to cross the Missouri River at Lake Oahe, immediately upstream of the Standing Rock Sioux Tribe’s Reservation.

In its most recent ruling, the lower court determined that the preparation of an Environmental Assessment (EA) was not sufficient under NEPA and ordered the USACE to prepare an EIS. It then went further, however, and voided the easement granted to DAPL until the EIS is complete, and even ordered DAPL to empty the pipeline in the easement area. That order to empty the pipeline was stayed by the DC Circuit while it reviewed the appeal, and the court sent the case back to the lower court to better justify its authority to order the pipeline to be emptied. The lower court has ordered the parties to prepare briefs on that question and the final briefs are not due until December 18. So in the meantime, the pipeline continues to operate and we fully expect the lower court will pay close attention to the oral arguments at the DC Circuit on November 4.

Everything is Political or Not

A review of the briefs filed by the Tribes and DAPL might suggest that DAPL’s problem is a classic case of a project being caught in the political winds of Washington. As DAPL sees it, the career civil service staff of the USACE under the Obama administration prepared the EA in good faith and properly found that there would be no significant impact on the environment in the area of the easement, and so the easement should be granted. But then the Tribes’ lobbying efforts with political appointees met with success, and in the outgoing administration’s final days, the Army (without agreement from the USACE itself) bowed to the Tribes’ pressure and published a notice of intent to prepare an EIS.

Conversely, the Tribes see this as a situation where, after years of thoughtful consideration, the Obama administration properly found that the Tribes had raised “important issues” regarding the pipeline’s permitting, which led the Solicitor of the U.S. Department of Interior to issue a binding legal opinion finding “ample legal justification to decline to issue the proposed Lake Oahe easement, or, alternatively, to develop an EIS to adequately evaluate the existence of and potential impacts to tribal rights and interests, consider a broader range of alternative pipeline routes, and undertake a catastrophic spill analysis prepared by an independent expert.” However, immediately upon assuming office, President Trump issued a “Presidential Memorandum” about the pipeline that resulted in the cancellation of the EIS process, withdrawal of the Solicitor’s opinion, and the issuance of the needed easement. 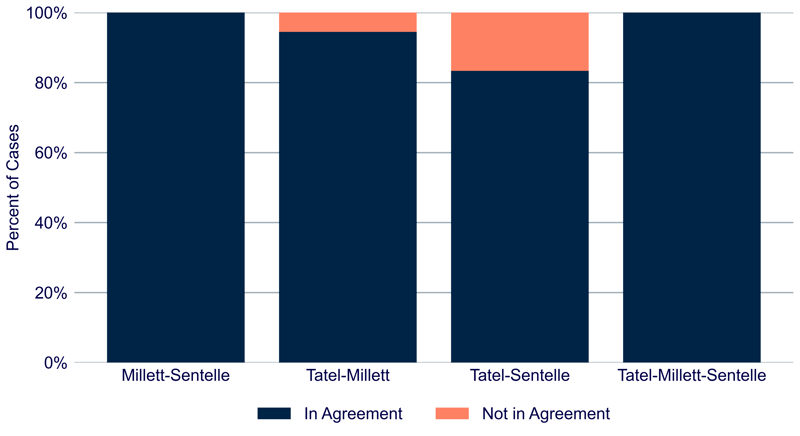 We have found only three published decisions on which these three judges acted as the entire panel and they were all unanimous decisions. But we also looked at panels where at least two of the judges served together on the panel. Judge Sentelle, the lone Republican, has been on 37 panels with at least one of the two Democrats, and in only three of those cases did two of them disagree, and they were all disagreements between Judges Sentelle and Tatel, with Sentelle dissenting twice and Tatel dissenting once. When the two Democrats have been on panels together, eighteen times in our dataset, there has been only one case in which the two did not agree, and in that case, it was Judge Tatel who dissented. We expect a similar result in this case, with unanimity the most likely outcome.

We will be listening to the oral argument and believe that the questions asked by the judges may provide some indication of how the court intends to rule. If the court focuses on either the second or third question, that would be bad news for the USACE’s decision, but not necessarily DAPL. If the court focuses on either the appropriateness of voiding the easement or emptying the pipeline, that would likely mean the judges have decided that an EIS is necessary. However, that would not necessarily mean DAPL would need to shut down. Instead, if it finds that the EIS is needed, we would expect the court to refer the decision about both the voiding of the easement and the emptying of the pipeline back to the lower court with directions on how it should approach those questions.

We think the main focus of the oral argument will be on whether the lower court properly interpreted a recent decision by the DC Circuit that considered how a project being “highly controversial” can lead to the need for the preparation of an EIS. That decision, Nat’l Parks Conservation Ass’n v. Semonite, was decided in 2019 by a panel including Judges Tatel and Millett, and was written by Judge Tatel. An even earlier decision that will also likely be discussed, New York v. NRC, was decided by a panel including Judges Tatel and Sentelle, and was written by Judge Sentelle.

The Semonite case clearly does not stand for the proposition that, because DAPL was highly controversial in the way we used that term above, means that an EIS is required. Instead, the Semonite case focuses on whether an agency’s reasoning for finding no significant environmental impact in an EA was controverted in a manner that was not fully addressed in the EA. We think that the judges on this panel will view this case as a routine application of these prior decisions and that their questions will mainly focus on how this case is similar to those earlier cases, and how it differs. Based on our reading of the briefs, we think that DAPL and the USACE have the better argument that, under the principles laid out in those cases, an EIS is not required. However, the questions asked by the judges during the oral argument often can be surprising and may provide us with new insight into how the panel views this case.

Presuming that we are correct and the court will not address the question of voiding the easement or emptying the pipeline, the path forward will likely proceed along two schedules. First, for the same cases we looked at above where at least two of the three judges from this panel were together, we have reviewed how long it typically has taken for a decision to be issued following the argument. 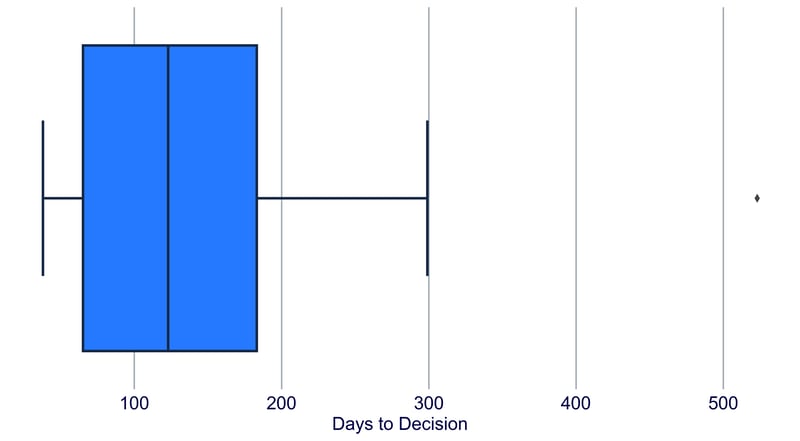 As seen above, the median time for a decision is just about four months after the oral argument, which would mean there would be no decision from the DC Circuit until about March of next year. In the meantime, the lower court is set to receive briefs through December 18 on whether it has the authority to shut down the pipeline, and whether it should do so. Given that the DC Circuit stayed the lower court’s prior shut down order, we do not anticipate a similar order being issued until the DC Circuit makes its ruling on the appeal. Therefore, we would expect that flows on DAPL are likely safe through the month of March at this point.